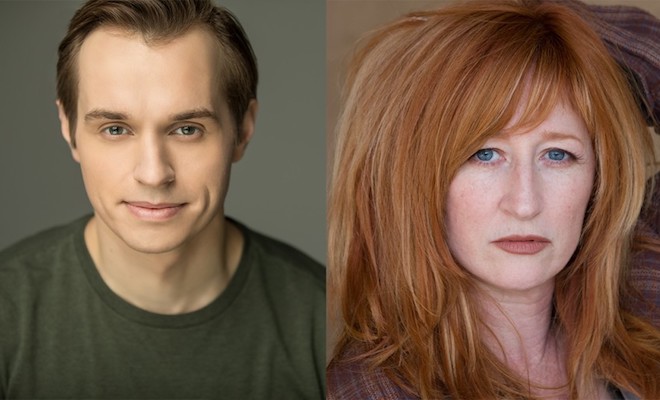 Beginning Performances on Tuesday, March 27, 2018
At the Broadhurst Theatre

“A SERIOUS HIT! Broadway’s got a BRIGHT NEW STAR, and its name is ‘Anastasia!’” – NBC New York

(March 6, 2018) Beginning Tuesday, March 27th, Zach Adkins will assume the role of “Dmitry” and Vicki Lewis will join the company as “Countess Lily” in the hit Broadway musical ANASTASIA. Adkins is an original member of the Broadway company, currently appearing on stage at the Broadhurst Theatre in the ensemble. A perennial favorite, Lewis returns to the Broadway stage after starring in Chicago, Damn Yankees, and many more.

Derek Klena and Caroline O’Connor will play their final performance as “Dmitry” and “Countess Lily,” respectively, on Sunday, March 25th. Klena and O’Connor are original members of the Broadway company.

From the Tony Award-winning creators of the Broadway classic RAGTIME, and inspired by the beloved films, ANASTASIA is the new Broadway musical that’s “one of the most gorgeous shows in years!” (New York Observer). This dazzling show transports us from the twilight of the Russian Empire to the euphoria of Paris in the 1920s, as a brave young woman sets out to discover the mystery of her past. Pursued by a ruthless Soviet officer determined to silence her, Anya enlists the aid of a dashing conman and a lovable ex-aristocrat. Together, they embark on an epic adventure to help her find home, love, and family.

ANASTASIA has played to sold out crowds on Broadway since opening in April 2017, in addition to garnering multiple Tony, Drama Desk and Outer Critics Circle awards and nominations.

The original Broadway cast recording is available at BroadwayRecords.com, Amazon.com and iTunes. The 75-minute album includes the Academy Award nominated favorite “Journey to the Past” alongside new numbers from the show such as Christy Altomare’s haunting “In My Dreams,” Ramin Karimloo’s passionate “Still” and Derek Klena’s heart-racing “My Petersburg.”

VICKI LEWIS (Countess Lily) starred on Broadway in the Tony nominated revivals of Damn Yankees (with Victor Garber, Bebe Neuwirth) and Chicago (opposite Charlotte D’Ambious), Wind in the Willows (opposite Nathan Lane) and the Roundabout’s production of The Crucible (with Harriet Harris); Pal Joey for Encores! (with Patti Lupone, Bebe Neuwirth), the Off-Broadway revival of I Can Get It For You Wholesale (with Carolee Carmello), Snoopy (David Garrison), Michael John La’Chuisa’s Buzzsaw Berkley, Angry Housewives, and The Cherry Orchard. She performed as a soloist with the New York Pops at Carnegie Hall under the helm of the late great Skitch Henderson. She starred as Beth on the critically acclaimed NBC series “Newsradio” for six seasons. Other notable television and film credits include: “Modern Family,” “Curb Your Enthusiasm,” “The Middle,” “Angie Tribeca,” “Making History,” “Still the King,” “Doll & Em,” “Bones,” “How I Met Your Mother,” “Grey’s Anatomy,” “Dirt,” “Three Sisters,” “See Dad Run,” “Austin and Ally,” “Melissa and Joey,” “Complete Works,” “Till Death,” “Home Improvement,” “Caroline in the City,” “Grace Under Fire,” “Seinfeld,” “Murphy Brown,” “Norm,” “Surviving Suburbia,” Bye Bye Birdie (Tyne Daly), Sonny with a Chance, Den Brother, The Ugly Truth, Godzilla, Mousehunt (opposite Nathan Lane), Pushing Tin, Breakfast of Champions (opposite Nick Nolte) and I’ll Do Anything. Her voice can be heard in a myriad of animated projects including Wonder Woman, “Batman: The Brave and the Bold,” Justice League: The New Frontier, “Phineas and Ferb,” “Rugrats,” “King of the Hill,” Alpha and Omega, “Ben 10,” An Extremely Goofy Movie, Tom and Jerry, Doctor Doolittle and “Doc McStuffins.” She voices Deb and Flo in the Pixar blockbusters Finding Nemo and Finding Dory. Her theatre work in Los Angeles includes How to Succeed in Business Without Really Trying, City of Angels, Billy Elliot and the world premiere of Michael John LaChuisa’s Hotel C’est L’Amour, which garnered her three Ovation Award nominations and one win. She starred in Gypsy, Hello, Dolly! and Annie at the Maltz Jupiter Theater for which she received three Carbonell Award nominations and two wins.