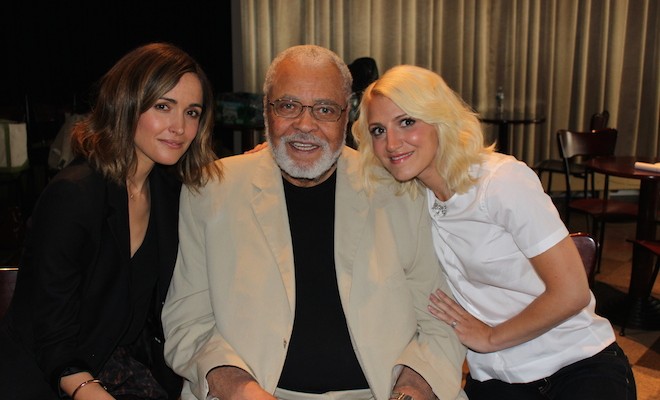 Perennial stage favorite You Can’t Take it With You returns to Broadway this season in a brand new star studded production starring James Earl Jones, directed by Tony Nominee and Drama Desk Award Winner Scott Elliot. The production started previews August 26, and opens on September 28, 2014 at the Longacre Theatre and is set to run for a limited 19-week engagement.

As to the plot, press notes state, “Family can do crazy things to people, and the Sycamore family is a little crazy to begin with. James Earl Jones heads the wackiest household to ever hit Broadway in Kaufman and Hart’s Pulitzer Prize-winning classic You Can’t Take It With You. He plays wily Grandpa Vanderhof, leader of a happily eccentric gang of snake collectors, cunning revolutionaries, ballet dancers and skyrocket makers. But when the youngest daughter brings her fiancéand his buttoned-up parents over for dinner, that’s when the real fireworks start to fly.”

The original production of this audience favorite opened at the Booth Theatre on December 14, 1936, and went on to win the 1937 Pulitzer Prize for Drama. This production marks the fifth New York revival of the play, the most recent occurring in 1983.

As an added bonus, the production has teamed up with The Humane Society of New York and will be allowing audience members to apply to adopt the kittens being used in the show as they outgrow their roles. The kittens are provided by the Humane Society and trained by Bill Berloni.

← Previous Story “FINDING NEVERLAND” MUSICAL DEBUTS AT A.R.T.
Next Story → 7 GREAT BOOKS THAT NEED TO BE ON THE NEW YORK STAGE