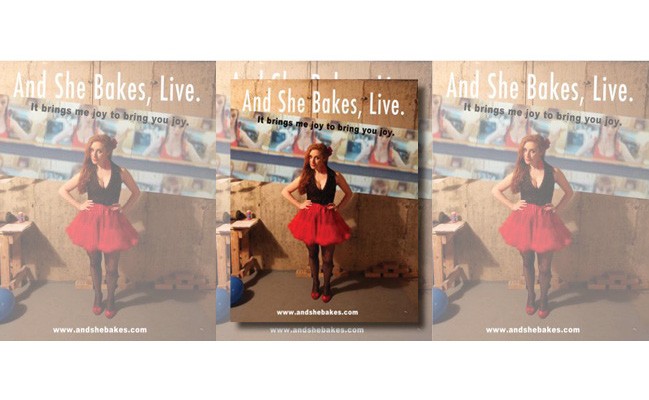 WITH HUMOR AND HEART, “AND SHE BAKES , LIVE” PROVIDES RECIPE FOR SUCCESS

Although Food Network executives scour the country each summer in their annual search to find the Next Food Network Star, seeking contestants with the ability to market products, have stage presence, and possess the obvious ability to cook, I seriously believe they should look no further than the Bakeress – star of And She Bakes and the YouTube sensation who is now presenting herself LIVE at the Celebration of Whimsy as part of the 2014 International Fringe Festival, through August 22nd.

The show was, in a word, wonderful — or to keep with the cooking metaphors, delicious. I think the main reason it works so well is because the “baking” referred to in the show’s title, is neither the central focus of the show nor is it an afterthought, but rather the “glue” that ties the show together, cleverly interwoven within the show’s “molten” center (Okay, I’ll stop with the cooking metaphors now).

And what is that, you ask? Well, the Bakeress (whose real name, Daliya Karnofsky, is not mentioned at all throughout the show nor in any of the YouTube paraphernalia), is indeed a cook, yes, but she’s also a relationship counselor of sorts, a la Dear Abby, and the show is centered around the Bakeress offering said relationship advice. The genius of the show lies in the fact that she bakes simultaneously while giving the advice, and equates each of the ingredients in her Gluten-Free Peanut Butter Vegan Treats—honey, peanut butter, vanilla extract, Rice Krispies, chocolate, and a dash of salt—with “ingredients” to a healthy relationship—sweetness, comfort, naughtiness, quirks, passion and nuance, respectively.

Clever, huh? But then she kicks it up a notch (like fellow foodie, Emeril). The real power in the performance comes through the fact that while the Bakeress is the relationship guru, and she’s giving her advice to others, the show is really a therapy session for herself, and we, as the audience, gradually realize this with her as the show goes on, and we see her come to terms with her own commitment and marital issues, learning from the advice she gives her three e-mail “patients.” She determines, in the end, brilliantly mixing the language of love and baking, that like her Gluten-Free Peanut Butter Vegan Treats: “My happiness is my own creation, and I choose my own ingredients.”

Of course, the show isn’t this heavy all the way through — it’s peppered with just the right amount — a pinch, if you will — of humor to lighten the mood after a deep, thought-provoking monologue. Highlights include goofy, over-the-top dance breaks, first to Christina Aguilera’s “Candy Man”, then to “I Love It” by Icona Pop, and a blender that goes off whenever the Bakeress mentions something that excites her… um… sexually.

In short, this show was excellent, and it’s all because of this woman. She’s humorous, heartwarming, charming, friendly, bubbly, touching, clever, and witty all in one. Oh… and she bakes.