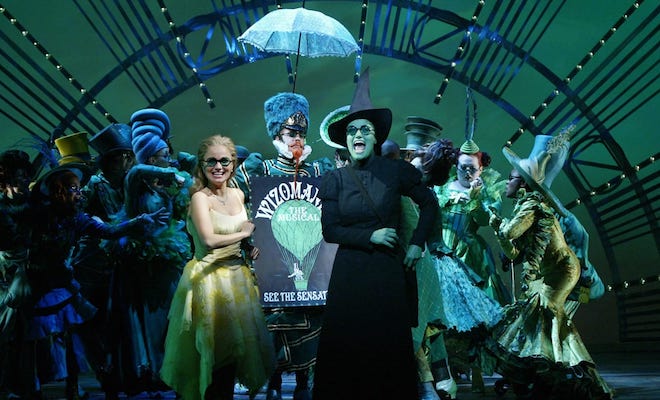 January 17, 2018, New York, NY – Beginning Tuesday, January 30th, the Broadway blockbuster WICKED will welcome, to the Gershwin Theatre, Tony Award nominee ISABEL KEATING as Madame Morrible and Obie Award winner Martin Moran as Doctor Dillamond.
ISABEL KEATING comes to the Broadway cast directly from playing Madame Morrible in the national tour of Wicked. She received a Tony Award nomination and Drama Desk award for The Boy from Oz, and has previously appeared on Broadway in It’s Only a Play, Hairspray, Enchanted April, and Spider-Man. MARTIN MORAN last appeared as Doctor Dillamond on national tour in 2011. His previous Broadway and Off-Broadway credits include Spamalot, Cabaret, Titanic, Bells Are Ringing, Big River, The Cider House Rules, The Tricky Part and All the Rage, among others.
Ms. Keating and Mr. Moran join a cast which currently includes Jackie Burns as Elphaba, Amanda Jane Cooper as Glinda, Fred Applegate as The Wizard, Ashley Parker Angel as Fiyero, Jye Frasca as Boq, and Kristen Martin as Nessarose. Rondi Reed (Madame Morrible) and Chad Jennings (Dr. Dillamond) will give their final performances on Sunday, January 28.

ABOUT WICKED
The Broadway sensation WICKED looks at what happened in the Land of Oz…but from a different angle. Long before Dorothy arrives, there is another young woman, born with emerald-green skin, who is smart, fiery, misunderstood, and possessing an extraordinary talent. When she meets a bubbly blonde who is exceptionally popular, their initial rivalry turns into the unlikeliest of friendships…until the world decides to call one “good,” and the other one “wicked.”

With a thrilling score that includes the hits “Defying Gravity,” “Popular” and “For Good,” WICKED has been hailed by The New York Times as “the defining musical of the decade,” and by Time Magazine as, “a magical Broadway musical with brains, heart, and courage.”

Winner of over 100 international awards including the Grammy Award and three Tony Awards, WICKED has been performed in over 100 cities in 14 countries around the world (U.S., Canada, United Kingdom, Ireland, Japan, Germany, Holland, Australia, New Zealand, Singapore, South Korea, The Philippines, Mexico, and Brazil) and has thus far been translated into six languages: Japanese, German, Dutch, Spanish, Korean, and Portuguese.

Based on the novel by Gregory Maguire, WICKED has music and lyrics by Stephen Schwartz, and a book by Winnie Holzman. The production is directed by Joe Mantello with musical staging by Wayne Cilento. WICKED is produced by Marc Platt, Universal Stage Productions, The Araca Group, Jon B. Platt and David Stone.