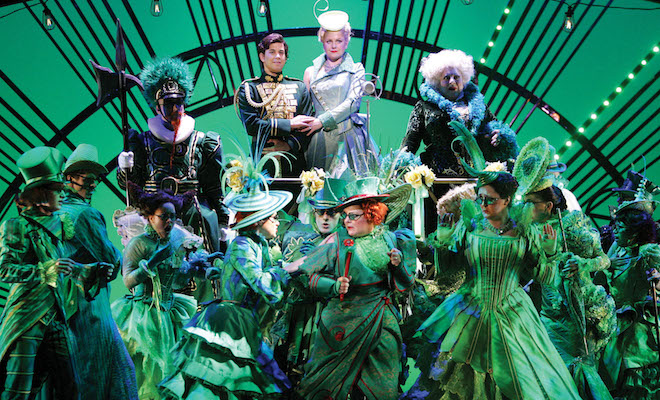 PJ BENJAMIN Returns To The Gershwin Theatre as The Wizard

January 25, 2017, New York, NY – Beginning performances Tuesday, February 7, WICKED will welcome back PJ BENJAMIN, who will return to the Broadway blockbuster in the role of The Wizard, and CHAD JENNINGS, direct from the National Tour of WICKED, in the role of Doctor Dillamond. This is Chad’s Broadway debut.

ABOUT THE CAST
PJ BENJAMIN’s (The Wizard) 46-year career includes almost seven years as the Wizard on Broadway and on tour, and Mr. Cellophane in the Broadway hit Chicago. Other Broadway: Torch Song Trilogy, Sophisticated Ladies, Charlie and Algernon, Pippin, Saravá, The Pajama Game and Damn Yankees. Shows range from All My Sons to La Cage Aux Folles to recent Camping with Henry and Tom. TV: “Madam Secretary,” “The Good Wife,” “Law and Order: SVU,” “Person of Interest,” “Louie,” and voice of the Dodo birds in Ice Age. Also with wife, actress Louisa Flaningam, he restored a log house museum on Chincoteague Island, Va.

ABOUT WICKED
The Broadway sensation WICKED looks at what happened in the Land of Oz…but from a different angle. Long before Dorothy arrives, there is another young woman, born with emerald-green skin, who is smart, fiery, misunderstood, and possessing an extraordinary talent. When she meets a bubbly blonde who is exceptionally popular, their initial rivalry turns into the unlikeliest of friendships…until the world decides to call one “good,” and the other one “wicked.”

With a thrilling score that includes the hits “Defying Gravity,” “Popular” and “For Good,” WICKED has been hailed by The New York Times as “the defining musical of the decade,” and by Time Magazine as “a magical Broadway musical with brains, heart, and courage.”

Winner of over 100 international awards including the Grammy Award and three Tony Awards, WICKED has been performed in over 100 cities in 14 countries around the world (U.S., Canada, United Kingdom, Ireland, Japan, Germany, Holland, Australia, New Zealand, Singapore, South Korea, The Philippines, Mexico, and Brazil) and has thus far been translated into six languages: Japanese, German, Dutch, Spanish, Korean, and Portuguese.

Based on the novel by Gregory Maguire, WICKED has music and lyrics by Stephen Schwartz, and a book by Winnie Holzman. The production is directed by Joe Mantello with musical staging by Wayne Cilento. WICKED is produced by Marc Platt, Universal Stage Productions, The Araca Group, Jon B. Platt and David Stone.