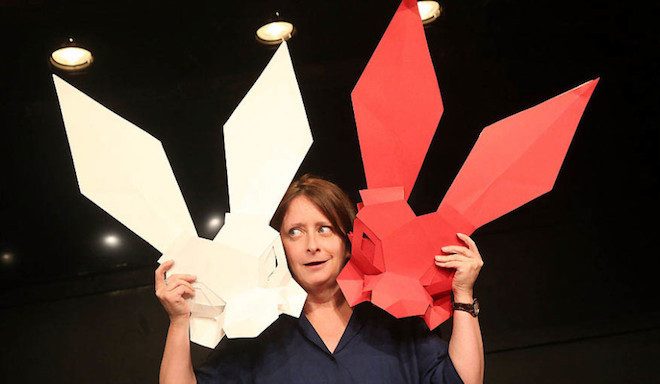 They join the lineup of previously announced upcoming performances:

NOW PLAYING IN A LIMITED ENGAGEMENT
AT WESTSIDE THEATRE

“A DAZZLING, TRANSCENDENT piece of ALIVE AND KICKING theater.
The whole building felt like it was LIVING AND BREATHING.”
http://www.ew.com/sites/all/themes/ew_com/img/ew-mobile-logo-full.png
“The play is SHARP…and AB-CRUNCHINGLY FUNNY.”

“A PLAYFUL, ENIGMATIC AND HAUNTING SHOW that takes on a gravity that prickles your skin, and keeps taking unexpected turns that often lead us back to the relief of laughter.
Any worthy theatrical experience is a dive down into a rabbit hole, where the destination is unknown. The distinction of ‘White Rabbit Red Rabbit’ is that the performer moves right alongside us on the journey.”

Tickets to performances of WHITE RABBIT RED RABBIT are available via Telecharge.com/212-239-6200. The performance schedule is Monday evenings at 8:00pm.

A portion of the play’s profits go to PEN International, the world’s leading association of writers working to promote literature and defend freedom of expression around the world (www.pen-international.org). WHITE RABBIT RED RABBIT is produced in association with Aurora Nova Productions and Boat Rocker Entertainment.