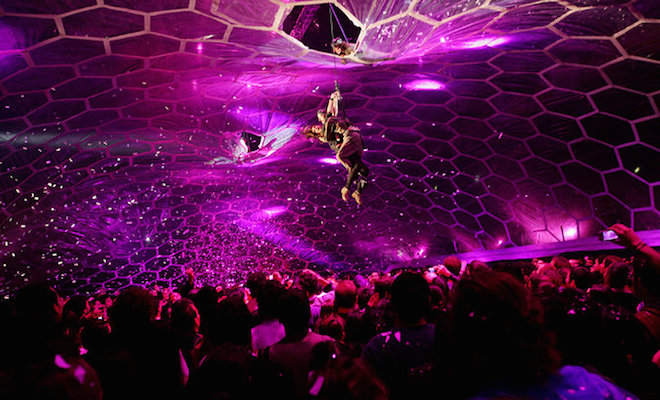 IT HAS ALL BEEN LEADING UP TO THIS!

THE THIRD EVENT IN THE LEGENDARY DE LA GUARDA TRILOGY

New York, NY (June 18, 2014) – S2BN Entertainment and OZONO Productions bring the hit off-Broadway show, Fuerza Bruta, back to life with WAYRA, the electrifying and innovative third production in the De La Guarda trilogy.  Having recently thrilled audiences in London, England and Buenos Aires, Argentina, the New York City production of WAYRA will begin performances at the Daryl Roth Theatre (101 E. 15th Street, NYC) on Friday, June 27, 2014 (originally scheduled to begin June 25), and features spectacular new scenes and, for the first time in the history of the trilogy, live music. An official opening night for WAYRA has been set for Tuesday, July 8, 2014.

With over 40 years of experience in the music and entertainment industry, S2BN Chairman Michael Cohl, is credited with producing and promoting some of the world’s highest profile and most successful music and entertainment events, and is known for his creativity and innovation in the industry. Through the years, Cohl has worked with many of the world’s most recognized artists including the Rolling Stones, U2, Pink Floyd, Barbra Streisand, The Who, Genesis, Pete Seeger, and Crosby Stills Nash and Young. Some of Cohl’s current projects include Barbra Streisand, Yo Gabba Gabba, Rock of Ages (performing in New York and Las Vegas), and the world renowned SPIDER-MAN Turn Off The Dark.

The culmination of the De La Guarda legacy, WAYRA takes the audience on an 80-minute thrill ride from beginning to end, with an extra 20 minutes of heart thrashing fun, fast paced and upbeat live music, on-stage musicians, and breathtaking aerial displays. The newly designed set and scenes are sure to present fans of the previous incarnations (and new fans alike) with fresh experiences and guarantee that WAYRA will be a theatrical thrill that floods the senses.

“The incredible thing about theatre is that it’s not an individual experience, it’s a social encounter,” says director Diqui James.

Fuerza Bruta is an Argentinean-founded multi-sensory spectacular created by Artistic Director Diqui James and Musical Director Gaby Kerpel, the same creators of De La Guarda.  Fuerza Bruta premiered in Buenos Aires in 2005 and has been seen in London, Lisbon, Cordoba, Buenos Aires, Bogota, Sao Paulo, Rosario, Puerto Rico, Venezuela, Queretaro and Edinburgh Fringe Festival, where it earned critical praise and was honored with the prestigious Bank of Scotland Herald Angel award for “the biggest and best show on the Fringe – the must see event of 2007” (The Herald).