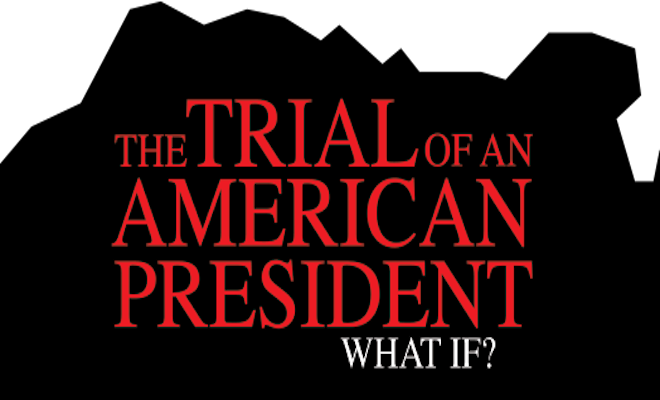 Trial of an American President

For the first time in history,an American President is on trial for crimes against the world.

The Trial of An American President, (http://www.BushOnTrialPlay.com) a new drama by Dick Tarlow with Bill Smith,will play off-Broadway at The Lion Theatre (410 W. 42nd Street) opening is this Thursday, September 29th. The show is produced by Shelter Entertainment LLC and Hello Larry Ltd and will play a limited engagement through October 15th.

With the continuing rise of ISIS and ongoing worldwide terrorism, world leaders demanded answers about who was responsible for the destabilization of the Middle East. The International Criminal Court at The Hague reached out to President George W. Bush to be accountable for his actions. Against the wishes of his family and advisors, Bush remarkably has agreed to stand trail.

Each night, nine audience members will be chosen as the jury and their collective verdict will be announced and reacted to by the cast. With the verdict changing nightly, the ending of the show changes as well.

The Trial of An American President poses questions about what caused the rise of ISIS.

The cast of The Trial of An American President includes Tony Carlin (Sylvia, Fish In The Dark) as George W. Bush, Mahira Kakkar (Romeo and Juliet at The Public Theatre; Clive at the New Group) as Narrator and Michael Rogers (Joe Turner Has Come and Gone) as Prosecutor. Directed by Stephen Eich (former managing director of the Steppenwolf Theatre Company; Frank, The Man, The Music at the Venetian/Palazzo in Las Vegas), the creative team includes scenic design by Ann Beyersdorfer (50 Shades! The Musical Parody national tour), sound design by Alex Dietz-Kest (The Diary of Ann Frank), lighting design by Ben Green (All Shook Up), video design by Phil Coccioletti at Sugarcamp Productions and projection design by Kevan Loney (Icon).

“I feel strongly that it is time for President George W. Bush’s actions to be properly examined,” said Dick Tarlow. “I was inspired to write this play out of concern for my children and grandchildren in the current world sociopolitical climate which I feel can be linked to the actions of the Bush presidency.”

Tickets can be purchased by visiting Telecharge at www.Telecharge.com or calling (212) 239-6200. For more information, please visit: www.BushOnTrialPlay.com.

Dick Tarlow (Playwright)
The Trial of an American President is the first play written by Richard Tarlow, at the age of 75, since he flunked his drama class in college, 54 years ago, for trying unsuccessfully to emulate Eugene Ionesco and Samuel Beckett with a Theater of the Absurd drama (6 people trapped in an elevator for three years). In the meantime, he started three different advertising agencies (a record in the industry) with accounts like Ralph Lauren/Polo, Revlon, ESPN, Cuisinarts, Victoria’s Secret, Neutrogena. Recently, he executive produced a new movie starring John Malkovich, Glenn Close, Patrick Stewart and Minnie Driver.

Bill Smith (Contributing Writer and Researcher)
Bill Smith has been writing since 1981. He’s published three books, including a biography of Billy Joel and hundreds of stories about fishing and the environment. He ran an environmental group for 12 years and was the first person to force the close of two nuclear reactors for polluting estuaries.

Stephen Eich (Director)
Mr. Eich is a producer, director, manager, and teacher with over 35 years experience in both the commercial and not-for-profit professional theatre. From 1979 to 1995, he was the Managing Director of Chicago’s Steppenwolf Theatre Company where he produced over 125 productions including the 1990 Tony Award-winning Best Play, The Grapes of Wrath. In New York and around the country he produced Steve Martin’s award-winning Picasso at the Lapin Agile and was co-producer of Paul Simon’s Broadway musical The Capeman.In addition he produced two concerts at Carnegie Hall featuring the National Voices of Puerto Rico. From 2000-2008 Mr. Eich was the Managing Director of The Geffen Playhouse in Los Angeles and from 2009-2012 he was the Executive Director of the Pasadena Playhouse. Most recently he was the director of the highly acclaimed Frank The Man The Music at the Venetian/Palazzo in Las Vegas.