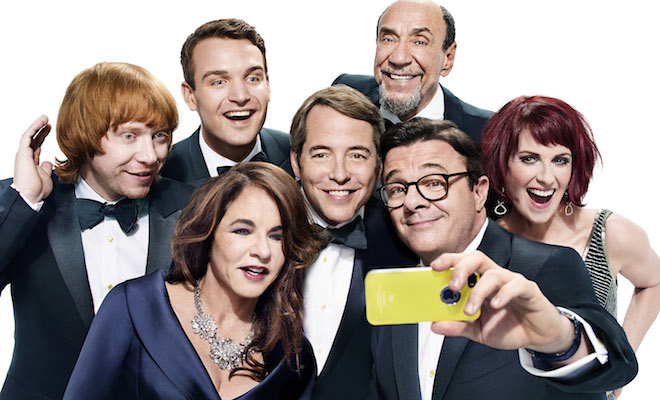 TOP TEN THEATRE STORIES YOU “NEED” TO KNOW THIS WEEK

What do Bryan Cranston, Kerry Washington, Edie Falco, James Earl Jones, Matthew Broderick, and Gloria Estefan have in common? They’re all part of Stagelight’s Top 10 Theater Stories of the Week!

10. The Emmy Awards honor some of the finest artists in television this Monday

This year’s Emmy Awards – hosted by comedian Seth Meyers – will take place this Monday, August 25.  We know, we know – this show honors excellence on the small screen, not on the stage.  But with some of the finest theater performers up for Emmy’s this year – Bryan Cranston, Kerry Washington, William H. Macy, Jim Parsons, Edie Falco, Jessica Lange, Sarah Paulson, Cicely Tyson – we sure will be tuning in to see who takes home the gold! Producers announced this week that the new Gloria Estefan musical based on her life, On Your Feet!, will be arriving on the Broadway stage in late 2015.  Featuring hit songs like “Conga”, “Rhythm is Gonna Get You”, and “1-2-3”, and directed by Tony Award-winner Jerry Mitchell, this Estefan extravaganza is sure to have us dancing in the aisles.  See Stagelight’s profile on this new musical HERE!

8. Shakespeare and Sesame Street? 3 nights only!
The Public Theatre announced its upcoming musical adaptation of Shakespeare’s The Winter’s Tale, playing 3 nights from September 5-7. Free tickets will be available online and in Central Park outside the Delacorte Stage. The show will feature cameos from Sesame Street, New York Theatre Ballet, and 200 New Yorkers from all 5 boroughs. Is it too early to line up for our tickets now? 6. David Hyde Pierce is back on Broadway, this time behind the scenes…
The upcoming Broadway season will feature It Shoulda Been You, a new musical directed by theater veteran David Hyde Pierce.  This musical premiered several years ago at George Street Playhouse and follows the wedding of a Jewish bride to a Catholic groom… wackiness ensues. 5. Motown The Musical takes a break
Motown The Musical will be taking a year-and-a-half hiatus from Broadway between January 2015 and July 2016.  In the meantime, the production will make an appearance on the London stage.  Guess we’ll just have to wait til 2016 for more “Dancing in the Street”. 4. Two-for-one ticket week has arrived
Get your tickets now at two-for-one prices as part of NYCGO.com’s Broadway Week, running from September 1-14.  Tickets are currently on sale for Broadway’s hottest shows, from long-running hits like Wicked to this season’s newest shows like This is Our Youth.  Get ‘em now – they’re going fast!

3. Get ready for a brand new Broadway theater!
Michael Riedel of the New York Post reported this week that the Shuberts may be planning to build a new 1500-seat Broadway theater.  Costing about $150 million dollars, this would be the first Broadway theater built since the Marquis Theatre in 1986, and would be squeezed between 45th and 46th Streets next to the Imperial Theatre.  A new theater means more Broadway shows, so fingers crossed that the project comes to fruition! 2. You Can’t Take It With You with James Earl Jones starts previews Tuesday
Previews start this Tuesday for You Can’t Take It With You, featuring a stellar cast.  With James Earl Jones, Kristine Nielsen (Tony winner for Vanya and Sonia and Masha and Spike), and Rose Byrne (who will also be appearing as “Grace” in the new upcoming Annie movie), this show is bound to be a must-see this fall Broadway season. 1. It’s Only A Play starts previews this Thursday
Broderick, Lane, Channing, and Mullaly.  This all-star cast performing a limited run will ensure that It’s Only A Play is one of the hottest tickets in town.  The show takes place on opening night of a new play… Producers flashback?  Let’s hope they pack in just as many laughs this time around.