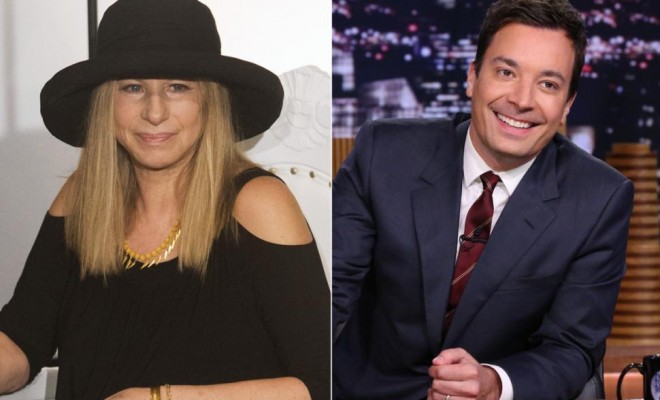 What is Barbra Streisand doing for the first time in FIFTY YEARS? Which new musical just got the ‘axe’? And who is set to be the next Hedwig on Broadway? Find out all this and more in Stagelight’s Top 10 Theater Stories of the Week!

10. Barbra Streisand hits up Jimmy Fallon
Ms. Streisand herself – star of stage and screen – will be making a rare talk-show appearance this Monday on The Tonight Show Starring Jimmy Fallon. Babs will be the only guest of the evening in her first late show appearance since 1963 with Johnny Carson. With such a rare guest, you better set your DVR! This past week, Encores! producers announced their upcoming October gala featuring the music of Richard Rodgers, Oscar Hammerstein, and Lorenz Hart. The event will be directed by Tony winner Warren Carlyle (After Midnight) and will star Kelli O’Hara, Laura Osnes, and Kate Baldwin. Tickets to the gala, including dinner and cocktails, are going for $500, but if you act fast, you can grab a ticket to the show only for as low as $30.

8. Look out! Bedbugs, a new musical, opens Off-Broadway
Bedbugs!!, opened Off-Broadway this past Sunday at the ArcLight Theatre on West 71st Street. Originally part of the 2008 New York Musical Theatre Festival, Bedbugs!! is set to terrify and delight audiences through late October. Just make sure you don’t bring any home with you… 7. Mad Men star Elisabeth Moss returns to the stage
Elisabeth Moss (of Mad Men fame) will return to Broadway in February in a revival of Wendy Wasserstein’s play, The Heidi Chronicles. Ms. Moss will play opposite another TV star, Jason Biggs (currently appearing on Orange is the New Black). And as luck would have it, the show will debut right around the same time that Mad Men’s final season will be riveting audiences. Guess we’re in for a double dose of Elisabeth Moss! 6. Second Stage cancels its ‘killer’ new musical
After its successful run in the West End, the musical version of American Psycho was set to debut Off-Broadway at Second Stage… until this week when producers pulled the plug. Rumor has it that producers are hoping to bring the murderous new musical straight to Broadway and have decided to bypass a stop at Second Stage along the way. We just hope we get to see this Bret Easton Ellis novel brought to life on the New York stage sooner rather than later. 5. Tickets to see Helen Mirren on Broadway are now on sale
Helen Mirren is set to reprise her role as Queen Elizabeth II in (a completely unrelated-to-the-film) production of The Audience this February. New York theatergoers can buy tickets now to see Mirren in the role that earned her an Olivier Award for Best Actress in a Play during the show’s 2013 London run. 4. The Flea Theater’s benefit to feature Sigourney Weaver and David Hyde Pierce
The Flea is holding a one-night-only benefit this Monday, featuring the cast of Broadway’s Vanya and Sonia and Masha and Spike. Sigourney Weaver, David Hyde Pierce, Kristine Nielsen, and Billy Magnussen will perform a reading of Noel Coward’s A Song at Twilight as part of the benefit. Tickets start at $275 and are for members only, so break out the checkbooks and grab a membership ASAP. 3. Disney Channel star brings Gigi to Broadway
High School Musical star Vanessa Hudgens is set to play the title role in Gigi in the upcoming Broadway production. The musical will debut at D.C.’s Kennedy Center in January, before an undetermined New York opening. The role of “Gigi” was originally played by a then-unknown Audrey Hepburn, so Hudgens certainly has her work cut out for her.

2. Star-studded concert features Lynch, LuPone, and Sting this Monday
Patti LuPone, Sting, and Kinky Boots’ Billy Porter are just a few of the names headlining this Monday’s Uprising of Love: A Benefit Concert for Global Equality. Proceeds go to promoting equality for the LGBT community, and the evening will be hosted by none other than Glee’s Jane Lynch. Tickets are still available for the one-night-only event at the Gershwin Theatre.

Michael C. Hall! Dexter star Michael C. Hall has nabbed the coveted role of “Hedwig” in the Broadway smash-hit Hedwig and the Angry Inch. The role – originally played by Neil Patrick Harris – is currently being portrayed by Andrew Rannells. Michael C. Hall will step into the role – and the heels – starting October 16. And as anyone who caught his “Emcee” in the last Cabaret revival knows, this will be the must-see performance of the fall.