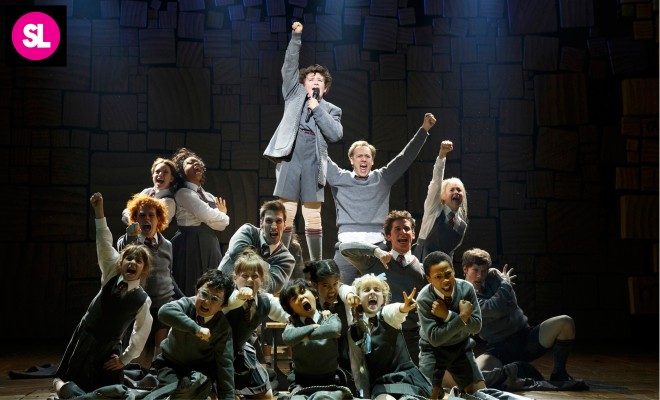 Which Shakespearean comedy is coming to the big screen? Which famous presidential couple was spotted at An American In Paris? And which Broadway mega-star is back on the London stage? Find out all this and more in Stagelight’s Top 10 Theater Stories of the Week! Julie Taymor’s 2014 production of A Midsummer Night’s Dream that played at Theatre For A New Audience will appear on the big screen for one-night-only on June 22nd. All showings are at 7pm and tickets are available through Fathom Events. Hedwig and the Angry Inch star Darren Criss and Cinderella star Laura Osnes are teaming up on the red carpet next week as hosts of “LIVE! From The Red Carpet”. The Tony pre-show will air on TonyAwards.com, CBS.com, Playbill.com, and TimOut.com. The national tour of the hit Broadway musical Matilda officially launched its national tour in Los Angeles this past week. Based on the Roald Dahl novel, Matilda has been playing to packed houses since its opening in 2013.

7. The Clintons come to Broadway

Audience members were surprised to look over and see President Bill Clinton and Former Secretary of State Hillary Clinton at last Saturday’s performance of An American In Paris. At intermission, the Clintons shook hands with fans around them.

Tony Award winner Idina Menzel launched her national tour this past Saturday opening in Seoul, Korea. Idina Menzel: World Tour 2015 arrives in America in July so get your tickets while you can. Broadway vet Brian Stokes Mitchell who last appeared on the Great White Way in Women On The Verge Of A Nervous Breakdown has booked a recurring role on television. He will appear on USA’s new series “Mr. Robot” which debuts June 24.

4. Roger Rees out of The Visit Chita Rivera’s Visit co-star Roger Rees is has left the show due to medical reasons. Producers said that Rees will be welcomed back when he is better, but Tom Nelis will play the role of Anton in his absence.

The latest “Cinderella” musical Ever After opened this past Sunday at New Jersey’s Paper Mill Playhouse. The musical is directed and choreographed by Kathleen Marshall and stars Tony winner Christine Ebersole. 1. Liza Minnelli is BACK!

Liza Minnelli is returning to the London stage for a one-night-only performance on September 20 at the London Palladium. The show is titled An Intimate Evening With Liza Minnelli and will include an interview with her as well as the performance of several intimate songs