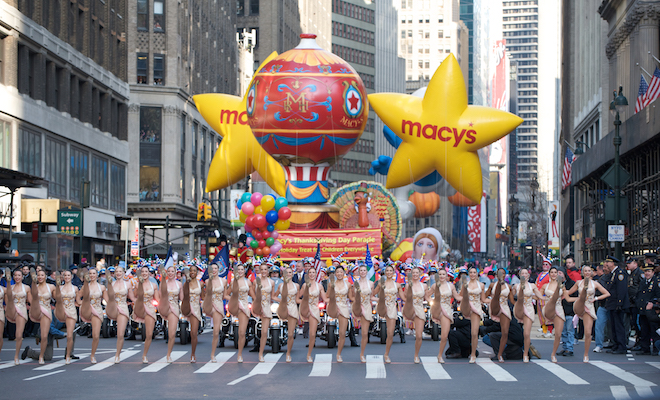 TOP 10 STORIES YOU NEED TO KNOW THIS WEEK

Will Robin Hood save the day on Broadway? What is Victoria Clark doing on Homeland? And which Broadway shows are performing in this year’s Thanksgiving Day Parade? Find out all this and more in Stagelight’s Top 10 Theater Stories of the Week! 8. The Illusionists starts previews this Wednesday
The North American tour of The Illusionists – Witness the Impossible will play a brief Broadway run beginning this Wednesday, November 26 at the Marquis Theatre. While not a “play”, this evening of magic features seven of the world’s best magicians performing “death-defying stunts, tricks, and sophisticated magic.” 5. ABC takes you backstage with Disney on Broadway
ABC announced this week that they will air a special TV event, hosted by Jesse Tyler Ferguson on December 14, that takes you on a backstage journey with the current productions of Broadway’s The Lion King, Aladdin, and the national tour of Newsies. The special will also explore the creation of some of Broadway’s biggest musicals including Beauty and the Beast, The Lion King, Aida, Tarzan, The Little Mermaid, Mary Poppins, Aladdin, and Newsies. 4. Broadway remembers legendary director Mike Nichols
Acclaimed director Mike Nichols passed away this past Wednesday at the age of 83. Broadway honored Nichols by dimming its lights Friday evening. Nichols earned himself nine Tony Awards over the years, most recently in 2012 for his direction of Death of a Salesman. 3. Thanksgiving Day Parade brings out the big Broadway numbers
Tune into NBC this Thursday for the 88th Annual Macy’s Thanksgiving Day Parade to see the floats, the balloons, and of course the Broadway stars. Idina Menzel, Nick Jonas, and the casts of Honeymoon in Vegas, Side Show, On the Town, and The Last Ship are scheduled to perform in the front of Macy’s famous 34th Street store. 2. Stage star Victoria Clark joins the cast of Homeland
Without giving anything away, Broadway veteran Victoria Clark will play a crucial role in an upcoming storyline on Showtime’s hit show Homeland. While Clark is no stranger to the small screen, she is best known for her stage work in Titanic, Cabaret, Urinetown, Light in the Piazza, Sister Act, and most recently Cinderella. 1. And it’s official…
Hedwig and the Angry Inch creator and originator John Cameron Mitchell has officially signed on to play the title role in the Broadway musical after Michael C. Hall leaves the show in January. This will be Mitchell’s first time playing the role on Broadway, as the original production played its run Off-Broadway. Said Mitchell of his return to the role, “she’s lured me back.” Well, we couldn’t be more excited!