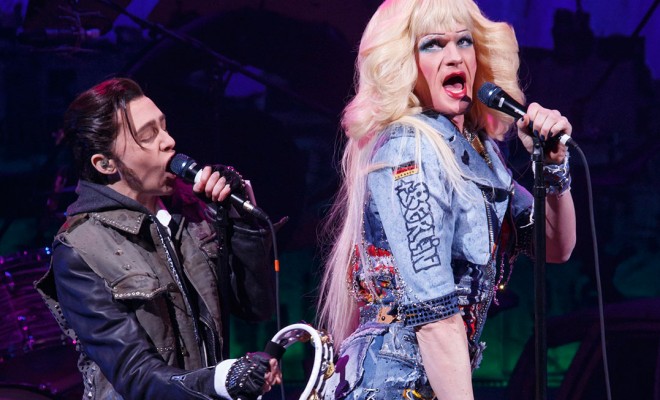 Hedwig and the Angry Inch currently stars TV and film superstar Neil Patrick Harris (of Doogie Howser and How I Met Your Mother fame) as the title character Hedwig. Harris is barely recognizable as the transgender rock star, with over-the-top make-up, fabulous wigs, killer dance moves, and a rock voice that brings down the house. Neil Patrick Harris is no stranger to the Broadway stage, having previously appeared in Proof, Cabaret, and Assassins. And while his win for Best Actor in a Musical for his role in Hedwig marks his first Tony Award win, Harris is also no stranger to the Tony Awards, having hosted the awards show four times.

Never leaving the stage, and singing/talking for the entire 90 minute show, Harris’ performance is one of both stamina and skill. He is able to move us through song and story, telling the beautiful tale of Hedwig – a transgender German, who is touring America with a broken heart and an angry inch. Harris is a skilled enough performer to move hearts one moment, and have the audience rolling on the floor laughing the next.

Joining Harris onstage is Hedwig’s band “The Angry Inch”, led by Hedwig’s husband Yitzhak – portrayed fabulously by actress Lena Hall, who also won a Tony for her role in the show.

Hedwig and the Angry Inch features our main character Hedwig singing songs and delivering a monologue for the entirety of the show. Hedwig tells audiences the story of how he was able to escape East Berlin by marrying a US soldier and transforming himself into a woman. But when he discovered that his sex-change operation had been botched, he was left with nothing but a “one-inch mound of flesh”, lovingly (and not-so-lovingly) referred to as his angry inch. Hedwig’s story continues as he describes how his husband deserted him in America, and how he found love with up-and-coming rock star Tommy Gnosis. When Tommy broke his heart and stole his music, Hedwig was left alone to tour America sharing his sad story with new husband, Yitzhak, and his band.

Hedwig and the Angry Inch has a rich history as an Off-Broadway sensation and a cult classic. First appearing Off-Broadway in 1998, the musical originally starred the show’s writer John Cameron Mitchell in the title role. Mitchell went on to reprise the role in a 2001 film version. Mitchell is largely responsible for the Hedwig we see on the Broadway stage today, having created the character and written the book of the musical. His beautiful story is enhanced even further by songwriter/lyricist Stephen Trask’s music. Trask’s tunes have become the stuff of musical theater lore with hits like “Wig in a Box”, “The Origin of Love”, and “Sugar Daddy” (which Harris performed live at this year’s Tony Awards).

While the current production – directed wonderfully by Michael Mayer – keeps the original music and story, the script is updated to include modern references, most notably to Hurt Locker The Musical, a fictional musical that supposedly opened and closed the night before Hedwig’s current concert performance.

Wildly entertaining and wonderfully moving, Hedwig and the Angry Inch starring Neil Patrick Harris is the must-see show of the 2014 season. And with Tony-nominee Andrew Rannells stepping into the role of Hedwig in late-August, you may just have to go back and see the show a second time.