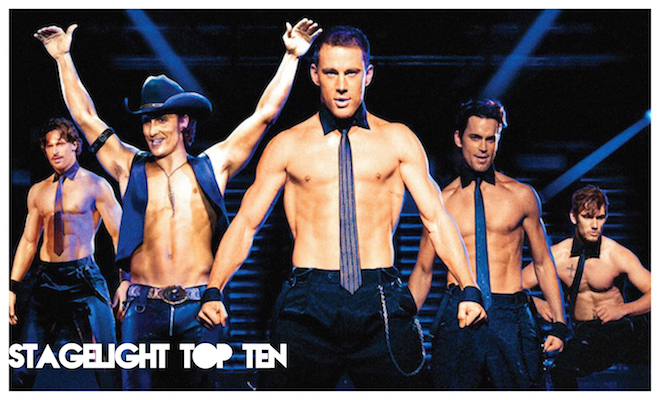 Which movie star sang his heart out in Little Shop? Which strip-tastic film is getting a stage adaptation? And what is Carol Burnett up to next? Find out all this and more in Stagelight’s Top 10 Theater Stories of the Week! Producers announced this week that the hit musical Spring Awakening will return to the New York stage. Though they didn’t specify if it would be Broadway or not, the production will be based on the Deaf West Theatre version that features hearing and non-hearing actors.

8. Magic Mike the Musical is headed to Broadway The creative minds behind Broadway’s If/Then will be penning a musical stage version of the big screen smash hit Magic Mike. Though dates have yet to be announced, a reading of the first act was previously held, so hopefully we won’t have to wait too long to enjoy.

7. Penn and Teller are back!

The hit comedic magician duo Penn and Teller will be appearing at Broadway’s Marquis Theatre beginning this week. They have a very short preview period, with previews beginning Tuesday and the show opening on Sunday.

6. Hamilton gears up for previews The smash hit of the season – the Public Theater’s Hamilton- will finally reach the Broadway stage starting July 13. This Lin-Manuel Miranda musical has received rave reviews and is highly expected to be Broadway box office gold. The new musical Amazing Grace will begin previews on July 16. The show is based on the story behind the song “Amazing Grace” and will be playing the Nederlander Theatre. For anyone who may have forgotten about it, the Tony Award winner for Best Musical Jersey Boys is still going strong on the Great White Way. They played their 4,000th performance this past week on July 2. The Broadway-bound musical Beaches opened on July 2 in Chicago. The show stars Shoshana Bean and is based on the novel from 1985. Broadway dates have yet to be announced.

2. Shakespeare in Love comes to Canada The successful stage adaptation of Shakespeare In Love that opened in the West End last year will be part of the 2016 Stratford Festival in Ontario. No word yet on if New Yorkers can expect a production anytime soon.

1. Carol Burnett and Tyne Daly together!

Producers announced that Carol Burnett and Tyne Daly will perform in a concert reading of the play Hollywood Arms on September 21. The play is co-written by Burnett and her late daughter and will perform at the Merkin Concert Hall.