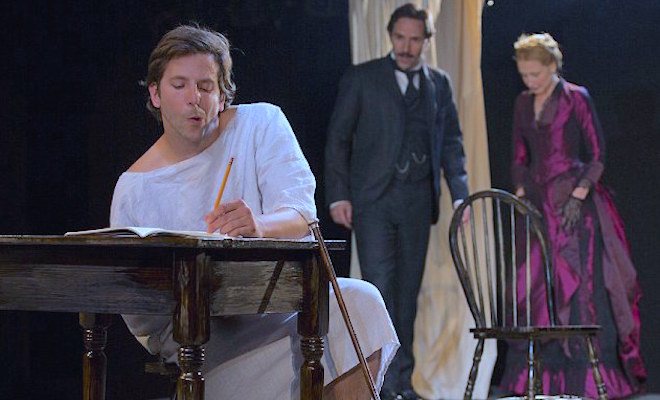 Magic comes to Broadway… Bradley Cooper is back on the Great White Way… and the Wicked film might just have a new director! All these stories and more are here in Stagelight’s Top 10 Theater Stories of the Week! The incomparable Patti LuPone is back at 54 Below for a two week stint starting this Monday. The cabaret is entitled Far Away Places Part Two and promises to feature signature Patti wit, charm, and vibrato, as she tackles a unique set list that includes Billy Joel and Kris Kristofferson. Tickets are pricey, but it’s worth it for the one and only Patti!

9.
Magic comes to Broadway – and we don’t mean Pippin… Tickets are on sale starting this week for the upcoming Broadway arrival of The Illusionists – Witness the Impossible. This touring magic show features seven world-class illusionists, and will play a six-week run at Broadway’s Marquis Theatre beginning November 26. While it’s no groundbreaking new play or musical, The Illusionists clearly has some “magic to do”, and we just might stop by to see it.

8.
Stop by the library for a piece of theater history The New York Public Library announced that Broadway Revealed will be its latest exhibition to join their Library for the Performing Arts, beginning November 8. The exhibition will feature over 100 of famed photographer Stephen Joseph’s behind-the-scenes Broadway panoramic photos, showcasing the magic that happens behind the big red curtain. Get over to the Library for the Performing Arts ASAP – and don’t forget your library card!

7.
Wicked the movie might just have found its director… Rumors have been running rampant about who will be directing and starring in the upcoming Wicked film, based on the Broadway musical. This week, composer Stephen Schwartz leaked that producers are currently in negotiations with Stephen Daldry (of Billy Elliot fame) to direct. This news was only made sweeter by Schwartz’s tease that the possibility of Liza Minnelli in the role of Madame Morrible was “not the worst idea I’ve ever heard.”

6.
The British are coming – and they’re bringing Wolf Hall Tickets are now on sale for the Royal Shakespeare Company’s upcoming Broadway productions of Wolf Hall – Parts 1 and 2. This Stratford transplant is based on the Pulitzer Prize-winning novels by Dame Hilary Mantel, Wolf Hall and Bring Up the Bodies. And why pick just one of the two shows? Saturdays and Sundays will feature marathon days where audiences can see both parts back to back. Producers announced this week that 50 Shades! (parodying the famous book series Fifty Shades of Grey) will extend performances through April 5 due to “sold-out houses and rave reviews”. Playing Off-Broadway at the Elektra Theatre, 50 Shades! boasts “Christian has come. To the heart of Broadway. And it will never be the same.” Well, now you’ve got until April to find out if that’s true.

4.
You Can’t Take it With You extends! The hit Broadway play starring James Earl Jones and Rose Byrne has officially extended its limited run to February 22nd. In a season stacked with solid plays, this extension may just be the boost You Can’t Take it With You needs to stay fresh in Tony voters’ minds come June. Get your tickets to see this hilarious production, now playing at the Longacre.

The Actors Fund is presenting a one-night-only benefit production of Mr. Magoo’s Christmas Carol on December 15 at the Gerald Lynch Theatre. Starring Tony-nominee Christopher Sieber, Magoo is bound to be a magical musical holiday treat for the whole family. Even Mr. Magoo himself can “see” that! The stars are out for three days only in Show Boat, a concert production that will be recorded as part of PBS’ “Live From Lincoln Center” series. Vanessa Williams, Norm Lewis, and Fred Willard will star in this groundbreaking musical, and will be accompanied by the New York Philharmonic.

Famous film actor Bradley Cooper returns to the New York stage this Friday in The Elephant Man opposite Patricia Clarkson. The play isn’t the only freak-show based Broadway offering, with Side Show playing right around the block, but it might prove to be the most successful. Elephant Man marks Cooper’s second Broadway appearance, after his 2006 performance in Three Days of Rain opposite Paul Rudd and Julia Roberts.