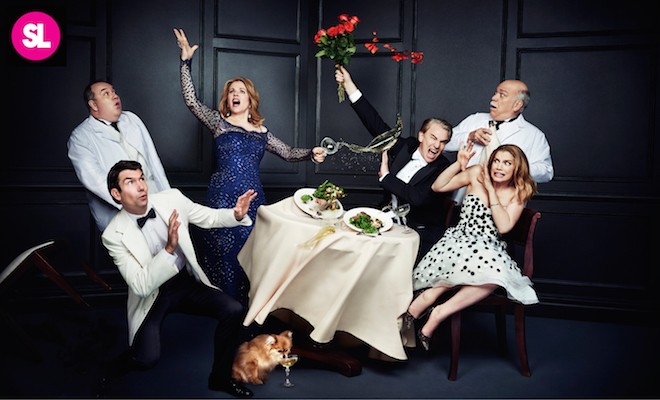 THIS WEEKS 10 THEATRE STORIES YOU NEED TO KNOW

Which TV comedian will be hosting this year’s Emmys? What Seinfeld vet is returning to the Broadway stage? And which Broadway mega musical is finally coming to a close? Find out all this and more in Stagelight’s Top 10 Theater Stories of the Week!

10. Kathleen Marshall’s Living on Love starts previews
Straight from the Williamstown Theatre Festival, Living on Love will begin previews at Broadway’s Longacre Theatre this Wednesday. The production is directed by Kathleen Marshall and follows the story of a celebrated opera star, played by real-life opera singer Renee Fleming. 8. Tickets now on sale for Off-Broadway’s 39 Steps
The box office is now officially open at the Union Square Theatre for the Off-Broadway revival of the Tony Award winning 39 Steps. Tickets to the Hitchcock spoof start at just $39 for the first 39 performances. Previews begin this Wednesday. 7. And this year’s Emmy Awards will be hosted by…
The Emmy Awards will hold its annual awards show on September 20 with television actor Andy Samberg in the role of host. Nominations are set to be announced on July 16. But with the Tony Awards scheduled for June 7, the Emmys will have to wait for now. 5. Skylight opens on Broadway this Thursday
The latest David Hare play Skylight will officially open at the John Golden Theatre this Thursday. The play features Bill Nighy and Carey Mulligan, and is directed by Stephen Daldry. Skylight played a successful run in London’s West End in 2014 prior to its New York arrival. 3. Audra McDonald in talks to join Beauty and the Beast
The Hollywood Reporter reported this week that Tony Award winner Audra McDonald is in final negotiations with producers to join the cast of Disney’s live action Beauty and the Beast, which already will feature Emma Watson, Emma Thompson, Kevin Kline, and Josh Gad. McDonald last appeared on the Broadway stage in the Tony winning role of Billie Holiday in Lady Day at Emerson’s Bar & Grill. 2. It’s Imelda Staunton’s turn as Mama Rose
Imelda Staunton officially reprised her role as Mama Rose as previews began this weekend for Gypsy at the West End’s Savoy Theatre. While Staunton has yet to appear on the Broadway stage, she boasts a long list of London theater credits, and may be best known for her onscreen work in films such as Vera Drake and the Harry Potter series.