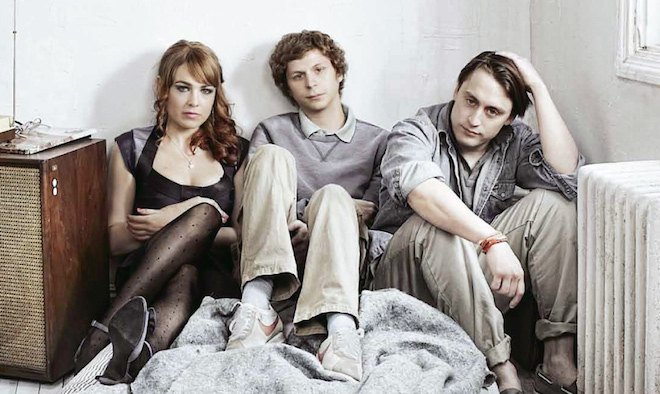 THIS IS OUR YOUTH

Much buzz surrounds the recent adaptation of the play, This Is Our Youth, which opened on September 11th, 2014.

Set in 1982 in New York City over a two day span, the play takes a deep look inside the lives of three young adults as they deal with self-centered parents, drugs, youthful anxiety, and “growing up”. When Warren, a sad 19-year-old who has stolen $15,000 from his abusive father, teams up with Dennis, his charming, drug dealing buddy, a whirlwind of chaos and life-changing decisions ensue. Add in Jessica, the beautiful, anxious, wise-beyond-her-years object of desire, and the stage is truly set.

The latest Broadway version of This is Our Youth stars Michael Cera (Juno, Arrested Development), Kieran Culkin (Igby Goes Down, Scott Pilgrim vs. The World), and Tavi Gevinson (TheStyleRookie.com), and was guided by Of Mice and Men director Anna D. Shapiro. Past productions of This Is Our Youth have also gone through their fair share of “soon-to-be” famous actors, while also generating several big city premieres. Matt Damon, Jake Gyllenhaal, Casey Afleck, and Mark Ruffalo are a few of the play’s famous former cast members.

Written by Kenneth Lonergan, this compelling story of adolescent growth and conflict was first performed and heralded here in New York in 1996. Among his credits, Mr. Lonegran has co-penned several acclaimed Hollywood screenplays over the years. His most popular film endeavors have been the commercially successful gangster comedy Analyze This and the epic Martin Scorsese historical drama Gangs Of New York. The latter earned him (as one of the three writers of the movie) an Oscar nomination for Best Original Screenplay at the 75th Academy Awards ceremony in 2003.

Although This Is Our Youth takes place more than thirty years in the past at the dawn of the HIV / AIDS epidemic, and well before the advent of the internet and smart phones, many of the same pitfalls that vex today’s youth are discussed by Warren (Cera), Dennis (Culkin), and Jessica (Gevison). Inside Dennis’ early-1980’s Upper West Side apartment, coming of age is hard-won, funny, confusing, tragic, and always a bit strange. Times (and technology) may indeed change, but the difficulties and challenges young people face growing up seem to have remained the same – whatever decade they may be living in.