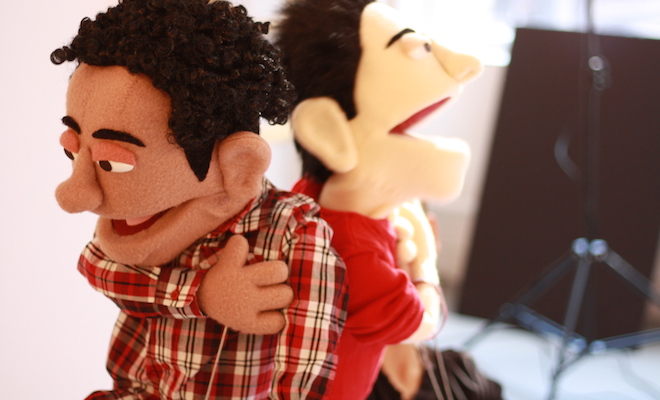 StageLight Magazine is proud to introduce its two newest correspondents Fred N’ Chad!  Along with their wildly successful show “Fred-om of speech in the Chad-der box” Fred and Chad have decided to expand their repertoire of success and get involved with the Broadway theatre community via their new series “Theatre Minute with Fred N’ Chad”.  “We’re really excited about this new adventure,” says Chad over Cool Ranch Doritos that this reporter brought along for the interview, “and we hope to finally put StageLight on the map.”  Fred sits quietly behind Chad for most of the interview except when, conspiratorially, he leans forward to the photographer and says “I just farted.” After contributing so enlightening a thought, Fred moves down from his stool and heads to the door followed by his executive assistant and live in help Daniel Gutierrez.  Fred is done for the day but Chad has decided to continue the interview and brings his own assistant into the conversation.  “This guy, I love him. Sometimes he gets lazy, doesn’t move fast enough.  Sometimes my sandwiches don’t have the edges cut off and I have yet to receive my bowl of only green M&Ms but I love his hair.”  Fred has ran back into the restaurant screaming his brother’s name.  “Chad! Chad!  OMG Chad!”  Whatever it is, it has Fred really excited.  Unfortunately this reporter couldn’t follow as both Fred N’ Chad ran outside leaving the bill, unpaid, on the table.