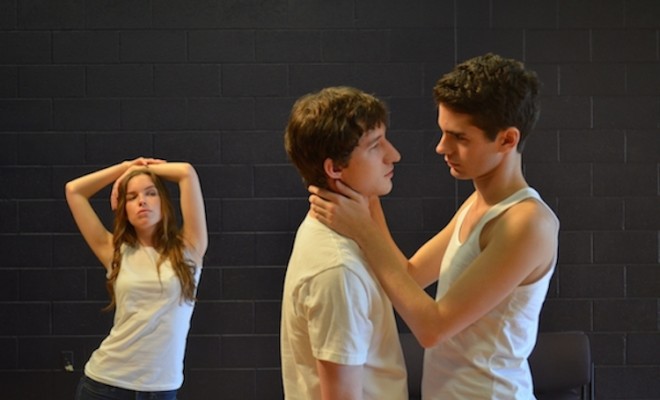 THE YOUNG ON YOUTH: “THE PICTURE (OF DORIAN GRAY)”

The famous (and sometimes infamous) Irish writer Oscar Wilde published The Picture of Dorian Gray in 1890, and since then, his scathing yet poetic novella has been adapted into numerous media. However, in their New York International Fringe Festival production The Picture (of Dorian Gray), The Gravity Partners – a professional theater ensemble affiliated with Juniata College – manages to look at Wilde’s seminal work with fresh eyes. This student group proves with their heartfelt adaptation that youth is not always, so to speak, “wasted on the young.”

The Picture (of Dorian Gray)depicts the tragic downfall of its vain protagonist at the hands of a devilish bargain. While marveling at painter Basil Hallward’s portrait of him, Dorian announces, “Oh, if the picture could only grow old and I could stay young; for that I would give my soul.” The title character gets his wish. As Dorian spends day-in and day-out reveling in leisure and basking in attention, his painting grows more worn and grotesque. Over the years, Dorian manages to alienate, destroy, and even kill his friends and loved ones.

What stands out in The Gravity Partners’ New York premiere production, which received multiple award nominations at the 2009 Absoluta Dublin Gay Theater Festival in Ireland, is its postmodern twist. In lieu of assigning parts to specific actors, adaptor and director Neal Utterback has his young cast of five (Jessica Denison, Jamison Monella, Andrew Kilpatrick, Phil Oberholzer, and Alyssa Newberg) switch-off roles; each character has his own unique pair of sunglasses. As the actors manically trades shades, the props take on the characters’ attributes, forcing us to consider the true importance of physical appearance. Additionally, Gabriel Gould’s original music and the ensemble’s devised movement work make the performance dynamic and enthusiastic.

Despite its 21st Century sensibilities, Utterback’s adaptation holds true to its source material. Attuned to Wilde’s biting humor and witty social commentary, Utterback rearranges and reinterprets some of the novella’s most memorable sentences to give them new meaning. At some point, each of the actors quotes the book’s famous line “…too much of myself in it!” with a unique take. Similarly, Wilde’s penchants for irony and paradox shine through in the hands of The Gravity Partners. Lines such as “men marry because they are tired, women, because they are curious: both are disappointed” and “nothing can cure the soul but the senses; nothing can cure the senses but the soul” provide healthy food for thought.

In a time of celebrity worship, photoshop, and reality television, Oscar Wilde’s condemnation of vanity is, perhaps, more pertinent than ever. It seems The Gravity Partners are wise beyond their years. The Picture (of Dorian Gray) plays at the Steve and Marie Sgourus Theatre on 115 MacDougal Street through August 24, 2014. Tickets can be purchased by calling (866) 468-7619 or online at FringeNYC.org