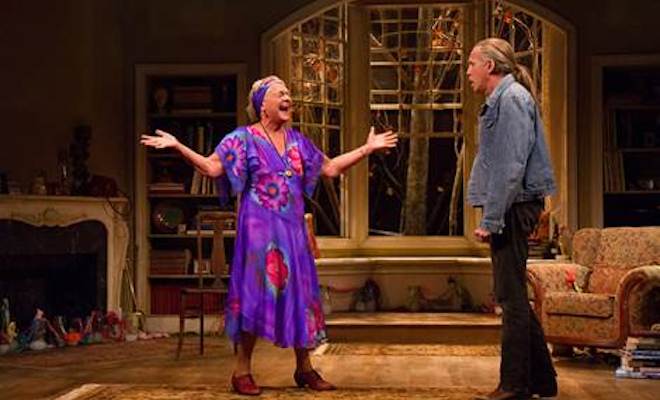 THE VELOCITY OF AUTUMN swirls around Alexandra, a 79-year-old artist in a showdown with her family over where she’ll spend her remaining years. In Alexandra’s corner are her wit, her volcanic passion and the fact that she’s barricaded herself in her Brooklyn brownstone with enough Molotov cocktails to take out the block. But her children have their own secret weapon: estranged son Chris who returns after 20 years, crawls through Alexandra’s second floor window, and becomes the family’s unlikely mediator. No sooner are the words “Hi, Mom” uttered than the emotional bombs start detonating. THE VELOCITY OF AUTUMN, written by Eric Coble and directed by Molly Smith, is a wickedly funny and wonderfully touching discovery of the fragility and ferocity of life.

THE VELOCITY OF AUTUMN had its world premiere at Boise Contemporary Theatre in Idaho in April 2011, and played to sold-out audiences at Cleveland’s Beck Center for the Arts in Ohio in April 2012.  The Arena Stage production of THE VELOCITY OF AUTUMN, directed by Molly Smith, starred Estelle Parsons and Stephen Spinella and ran from September 6 through October 20, 2013 in the Kreeger Theater.  A pioneer not-for-profit resident theater in its 64th Season, Arena Stage is a national center dedicated to American theater.