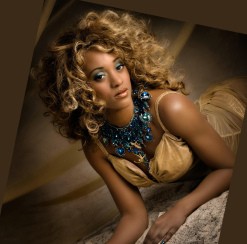 i caught up with sherisse springer (a canadian from toronto) who currently plays liz (pop!) in the cast of the international tour of CHICAGO the musical. i walked into the lobby of the hotel in colorado springs, and she was patiently waiting for me at the coffee counter. she looked ready for the day — post-workout of course — in her sea-foam green tank, short black skirt, and a sensible pair of mustard yellow ballet flats.

“i need coffee. that’s my storyline right now, “she said while scratching her head donned with short blonde hair. she grabbed her caffe latte with fat free milk and sugar free vanilla flavoring and while flashing a bright, glowing smile said, “i’m on the no fat thing.” she took a sip of her heaven and points to the full cup. “this drink is everything.”

i led her over to a table and we began.

the story: so, sherisse, how long have you known that you’ve wanted to be a performer?

sherisse: since i was a strong five. whenever my parents took me somewhere where there was music — grocery stores, theme parks, anywhere… — i was dancing or performing in some way. when I was really young i saw ‘cats’ when it came to toronto, and i remember feeling like i wanted to be on the stage.

the story: at any point did that alter? did that dream change? sherisse: 100%.  i remember one time — 2005 — i was gonna go back to school. i was frustrated and thought that this fight wasn’t for me. i was getting burned out and i wanted to do new things and the opportunities weren’t there where i was. “what had happened was” i was about to pay my money to be in school, and once that happens you’re in. i was in final callbacks for ‘dirty dancing’ in toronto. it was between me and 2 other girls. and i thought “maybe this will be the thing that will drive me.” so i didn’t pay and went to the callback. and didn’t get it.

true. story. and i couldn’t go to school cause i missed the cut-off to pay. there was a call (audition) for ‘we will rock you’ — and by this point i’m over it — and i went in and ended up booking it. after that i did ‘we will rock you’ in toronto. when that closed, i had a week off and moved to montreal to do ‘cirque’ and ended up there for four years. after ‘cirque,’ i moved to l.a.

the story: what was your first show?

sherisse: ‘mama mia.’ it was the first real show i did. and i think i’ll be playing at that same theatre on the [CHICAGO] tour.

the story: is your name on the wall somewhere?

sherisse: we ain’t allowed to write on the walls at princess of wales. how many theatres we got in toronto?! we can’t be writin’ on the walls.

the story: what have been the two biggest challenges in your pursuit?

sherisse: lemme pick two. one has been being a canadian. i love being a canadian, but there’s only a certain amount of things that you can do living in canada. so getting to the states…it’s the hardest thing. it’s really, really difficult and costs a whole ton of money. especially on a visa. you can’t get a real job. you’ve had to move your life to a different country and the only money you can make to live is through dance. if you move to l.a. you have to buy a car…you have to pay real bills in a place that doesn’t really know you yet…so you have to have really nice parents. (she

laughs.) another has been knowing what to do. finding the right timing. and for me that’s hard. now, i have a higher sense telling me and that’s fantastic because my own way wasn’t working.

the story: are you dating anyone?

(she puts her elbows on the table and leans in with raised eyebrows.) sherisse: (pause. insert stank mouth.) no. i’m seen.gul. [someone should see my headshot here] and, honey, my face is beat. i’ve dated plenty within this industry. i need someone who knows what/who they are separate from what they do, because if this defines you then you can get tricked into who you are. and [i need] someone who’s a real person. this is really actually NOT difficult.

the story: (laughter.) but has proven to be difficult.

goals. you connect with that. being genuine to who you are is attractive. gosh. i’m so excited. where ARE you?

the story: we both know that CHICAGO is a tough show to get into and there are people literally all over the world who’ve tried for years to get to where you are, and it seems that you’ve kind of taken the fast track. you’ve done CHICAGO at the hollywood bowl and got the call for the tour. for all of those people who are chomping at the bit to get into this show, what would you have to say to them?

sherisse: i do wanna say i’ve chomped at the bit  for a lot of things in other ways. there’s a lot of things that i’ve chomped at the bit for and never got it. (she laughs.) i’ve been living in this fosse world for a very long time….since i saw ann reinking in ‘annie’ and something about the way she moved…it was sophisticated and glamorous. i wanted to be that lady. it’s the hottest movement. two ends of the spectrum that mesh in the middle. and for the bowl audition for the record, they did NOT want to see me…at all, but my agent got me in. (she pauses to think, and puts her hand over her heart.) i am so lucky they took a chance on me. it’s a blessing because i never thought i’d be one of those people. you have to have knowledge and study. you need to know the vocab and understand it.

the story: what is your favorite part about being in CHICAGO the musical? is there something that you do onstage every night where you say “i can’t wait to ______?”

sherisse: for me, as soon as i walk out there. for me walking with that chair on that second count of eight and turning and seeing that audience. i’m…in…CHICAGO. i mean i don’t even…ugh. (she starts to cry and her voice breaks.) so good. every night. amazing.

(she tosses her head back and laughs.)

the story: okay, so…give me three pieces of tour advice.

sherisse: this one is a twist because there are things that i REALLY need and things that i just (whispered) need…like, clearly, a hot plate. (she laughs.) family. more than just blood. the people that keep you true to who you are. happiness. you lose that feeling it ain’t great. love. loving people and not forgetting to love people. it sounds so cliché, but those are the important things to me. i mean, a check’s great. i’ve gotten really great checks for years and hated every single day of my life. sat in my car until a minute before [i had to be there] and then would race to the stage door because i couldn’t stand being around it.

i don’t recognize the person i am now. this is who i should have always been. and i’m moving to new york after tour in march. scary. i’m scared and excited. i’m ready for a new journey. i’ve always played life safe. (she emphasizes “always.”) and i don’t know how it’s gonna work and i don’t know i’m gonna get my stuff from l.a. to new york…but i will put my faith in it and it will work itself out. sherisse has performed in numerous musicals including  the toronto casts of  ’we will rock you’ and ‘mamma mia’ and has had the opportunity to perform with ‘cirque du soleil in las vegas. she has also danced for artist including rhianna and justin timberlake, and has performed at the 2013 academy awards. she is currently works with dancers alliance, a nonprofit organization that was formed over 20 years ago whose mission is to improve the careers of professional dancers and choreographers through education and solidarity. (@dancersalliance.) she loves the journey and can’t wait to see where it takes her next.