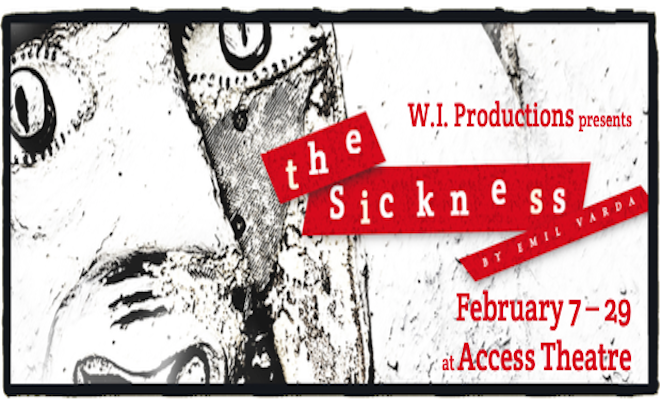 W.I. Productions presents The Sickness, a new play written and directed by Emil Varda. The Sicknessplays a limited four-week engagement, February 7 – 29 at Access Theatre (380 Broadway, at the corner of White Street, NYC). The official opening is Thursday, February 13 at 8PM. Tickets are available online at OvationTix.com.The Sickness follows two artists lost in the mad hell of heroin addiction. Set in the Lower East Side of the 1990s, the play is structured from Homer’s Odyssey, only aboard a Ship of Fools, without a captain, without a beginning or goal, going nowhere, lost in frenzied pursuit of an Ithaca that cannot be found.  The cast of The Sickness features Ryan Cupello (National Tours: Dirty Dancing, Fiddler on the Roof),  Mia Vallet (off-Broadway: Mary Shelley Frankenstein, Ashville). The scenic and costume design is by Vincent Gunn, and lighting design by Alexander Fetchko. “I feel compelled to return to art, because I am deeply troubled by the direction of our world, feel powerless against it and, don’t see a clear path forward. My colleagues and I are attempting to revisit the radical potential of twentieth century European avant-garde theatre because it allows for complex forms of artistic and intellectual expression that challenges conventional forms without surrendering to sentimentality or postmodern nihilism. Our desire is to create theatre relevant to people living here and now. We hope to engage with everyday problems demonstrating the honest facts of political and social reality,” said Varda

ABOUT THE ARTISTS RYAN CUPELLO(Y) is proud to be part of The Sickness. National tour: Dirty Dancing, Fiddler on the Roof. Select Regional: Violet, The Temperamentals, Les Miserables, Last Night of Ballyhoo, Light in the Piazza. Film: Once Every Day. MFA: ART/Harvard. Huge thank you to Lisa Price and the Price Group team! Love to my parents! Instagram: @rfcupsMIA VALLET(X) is excited to appear in her second production with Varda Studio. Her past credits include: Off Broadway: Mary Shelley Frankenstein (Ensemble for the Romantic Century, Signature Theatre), Ashville (The Rattle stick Playwrights Theatre). Television: Hightown (Starz, upcoming), Believe (NBC), Eye Candy (MTV), Blindspot (NBC), and The Mysteries of Laura (NBC). She has a BFA from the University of North Carolina School of the Arts. EMIL VARDA (Playwright & Director) was a theatre maker and political dissident in Communist Poland. After immigrating to the United States, he continued to work in theatre in New York City, before entering the restaurant business, where he is the co-owner at the Waverly Inn. He is pleased to return to theatre and art. His most recent production, All Roads Lead to the Kurski Station, played in New York City at the East Village Playhouse, HERE Arts Center, and Under Saint Marks, as well as touring to Brama Grodzka in Lublin and ACUD Theatre in Berlin.