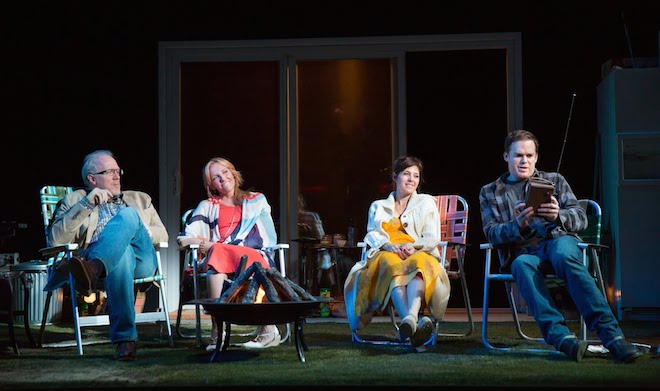 The Realistic Joneses: A Review

I didn’t know anything about Will Eno’s work before seeing The Realistic Joneses a few weeks ago.  I knew of Thom Pain (based on nothing) by name and Pulitzer-finalist reputation, but had not read or seen his work.  So when I got a mailing about his new play, with a pretty amazing cast, Toni Collette, Marisa Tomei, Tracy Letts and Michael C. Hall I was curious to say the least. But even with a discount offer, it’s not an insubstantial investment. Little did I know that the advertising image of a dead squirrel on a mailbox would be so meaningful in my life, but that’s another story.  So, on the strength of seeing a new work by a writer I didn’t know, I took the bait.  And I couldn’t have been happier with the results.  The ‘controversy’ if you want to call it that, over Tony snubs has been covered quite well elsewhere so we don’t need to go there (though to my mind it’s inconceivable that the play, at least, wasn’t nominated); but I thought the Joneses was well worth the gamble.  Apparently it’s doing good business as well, with consistent weekly grosses of over 90%.  Of the actors, three out of four scored large with me, the one exception being Ms. Collette, who while she had some nice moments, didn’t inhabit the space in quite the same way that the other three did.  Mr. Hall was a nice surprise, though I loved his work in Dexter, he was an unknown to me on stage.  Ms. Tomei was as good as I expected her to be, in a part that didn’t really explore her range, but she was right in the pocket in the absurdist mood of things. The real stand out for me was Tracy Letts – what presence.  I regretted missing his turn as George in Who’s Afraid of Virginia Wolfe, before seeing him; I regretted it even more after.  I’ll never miss him on stage again. I guess the big problem people have with the show is that it isn’t your standard run-of-the- mill commercial Broadway show.  I suppose I’ll have to give them that point.  It sort of meanders in its wonderful nutty way from start to finish, but an absurdist view of the world  holds a much truer reflection of that world, in many ways, than the standard commercial theater.  Maybe that’s why people don’t get it.  Because they don’t want to confront certain truths; or the fact that when a play ends, the characters lives won’t be all neat and tidy and resolved. If I were going to quibble, I might say that some of the word play was kind of random; some of it seemed at times to be a collection of notes the playwright made; observations that came to him and he had to scribble them on something/anything lest he forget them, hoping someday to use it in a play.  (I sure do that; my bet would be that most playwrights do!)  But they were funny. Being a playwright myself, I often will find these ah-ha moments in plays that seem to me to be inspired moments when I can just see the writer sitting there, scribbling away, catching the wave of inspiration and going with it . . . and finding this character taking him places he had no idea he was going.  When that happens it’s golden.  There were several moments that caught me in that way with the ‘Joneses’. I found the scene between Mr. Hall and Mr. Letts, downstage center talking about not much of anything/everything to be particularly inspired. That scene, is much like the play as a whole, nothing much happens in the play (in a dramatic arc sense anyway), but everything does.  Whether any critical resistance to the play is the shock of recognition or the shock of expectations is hard to say; but I willingly went along for the ride, dead squirrel and all.

Ric Siler is an actor and playwright from West Virginia, now living in Nyack, whose most recent play is Working Man Blues, the third play in a trilogy about coal miners.