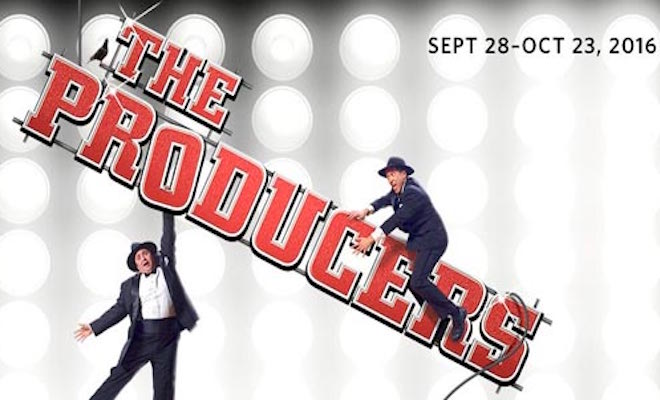 (MILLBURN, NJ) — Paper Mill Playhouse has announced the cast and creative for Mel Brooks’ award-winning musical The Producers, directed by Don Stephenson and choreographed by Bill Burns. The Producers features music and lyrics by Mel Brooks, a book by Mel Brooks and Thomas Meehan, and the original Broadway direction and choreography by Susan Stroman. Leading the company are David Josefsberg as Leo Bloom, Michael Kostroff as Max Bialystock, Ashley Spencer as Ulla, Kevin Pariseau as Roger De Bris, Mark Price as Carmen Ghia and John Treacy Egan as Franz Liebkind. The Producers will run at the Millburn, New Jersey, theater from September 28 through October 23, 2016.

The Producers is the hilarious smash hit about two theatrical producers who scheme to get rich by overselling interests in a Broadway flop. Complications arise when the show unexpectedly turns out to be successful. The musical took Broadway by storm in 2001, winning a record-breaking 12 Tony Awards and three Olivier Awards.

“It’s a thrill to revisit this hilarious show as a director, having played the part of Leo on tour and on Broadway,” commented director Don Stephenson. “To build The Producers at Paper Mill Playhouse is ideal. The facilities and the support that artists receive make for an enjoyable and seamless creative process.”

David Josefsberg (Leo Bloom) returns to Paper Mill Playhouse, where he was seen as Tony Rocky in Honeymoon in Vegas and as Max in Lend Me a Tenor. He reprised his role in Honeymoon in Vegas on Broadway and he is currently appearing in An Act of God. Mr. Josefsberg’s other Broadway credits include Les Misérables, Motown, The Wedding Singer and Grease.

Michael Kostroff (Max Bialystock) is best known for his roles on HBO’s hit television series The Wire and The Disney Channel’s Sonny with a Chance. Mr. Kostroff was seen on Broadway in The Nance. At Paper Mill Playhouse Mr. Kostroff appeared in Can-Can, Les Misérables and Lend Me a Tenor.

Ashley Spencer (Ulla) appeared on Broadway in Rock of Ages, Priscilla Queen of the Desert, Grease and Hairspray. Ms. Spencer was a finalist on the NBC television series Grease: You’re the One That I Want. Ms. Spencer previously performed the role of Ulla at Pittsburgh CLO.

Kevin Pariseau (Roger De Bris) returns to Paper Mill Playhouse, where he portrayed Charles Thomson in 1776. On Broadway Mr. Pariseau appeared in Legally Blonde and he performed in Show Boat with the New York Philharmonic.

Mark Price (Carmen Ghia) was featured on Broadway in Mary Poppins, All Shook Up, Wonderful Town, Dance of the Vampires and others. Mr. Price was seen at Paper Mill Playhouse in Can-Can and Lend Me a Tenor.

Don Stephenson (Director) returns to Paper Mill Playhouse, where he directed Vanya and Sonia and Masha and Spike and Lend Me a Tenor. He also played John Adams in 1776. Mr. Stephenson directed Titanic at Lincoln Center, Of Mice and Manhattan at the Kennedy Center, The Other Place at the Alley, Guys and Dolls and The Roar of the Greasepaint… at Goodspeed, Lend Me a Tenor at Bay Street, The Cottage at Theatre Aspen, Noises Off at Pittsburgh Public Theater, Titanic at the Muny, Deathtrap and The 39 Steps at Flat Rock Playhouse, Titanic at the Hangar Theatre, Sister Act at Marriott Theatre and I’ll Eat You Last at TheaterWorks (Hartford). Mr. Stephenson directed Oleanna, Cat on a Hot Tin Roof, and Doctors and Diseases at the Barter Theatre. Some of Mr. Stephenson’s other directing credits include A Charles Dickens Christmas (Urban Stages), Buck Simple (Garrick Gaieties), When Pigs Fly (Kaufman Theatre), Golden Voices (Symphony Space) and Old Flames (Theatre-Studio Inc.).

James P. Moore (Music Director) worked on the Broadway productions of On the Town, Gigi, Follies, South Pacific, Ragtime, Steel Pier and Company. Mr. Moore worked on tours of The Producers, Kiss Me, Kate, Crazy for You and more. Next spring Mr. Moore will music direct the Broadway revival of Miss Saigon.

Robin Wagner (Original Scenic Design) is a three-time Tony Award winner for his scenic designs for The Producers, City of Angels and On the Twentieth Century. Some of Mr. Wagner’s other Broadway credits include Young Frankenstein, The Boy from Oz, Kiss Me, Kate, Saturday Night Fever, 42nd Street and more.

David Peterson (Scenic Coordination) served as the associate scenic designer for many Broadway shows including Young Frankenstein, A Chorus Line, The Wild Party, Kiss Me, Kate, Victor/Victoria and more.

Martha Bromelmeier (Costume Coordination) has designed costumes for hundreds of theatrical productions including The Hunchback of Notre Dame at Ogunquit Playhouse and Cagney off-Broadway. Ms. Bromelmeier has worked at many regional theaters including Barrington Stage, Goodspeed, Bay Street, Shakespeare Theatre of New Jersey and more.

Randy Hansen (Sound Design) is Paper Mill Playhouse’s resident sound designer and has designed sound for more than 130 musicals and 40 plays. Many memorable moments include working with opera star Jessye Norman, the Indianapolis and Baltimore Symphony Orchestras, and the Macy’s Thanksgiving Day Parade. Mr. Hansen was the president of Audible Difference Inc., a sound design company that over the past 30 years has served the fashion industry in New York and Paris.

Telsey + Company (Casting) is an award-winning organization of casting professionals in New York City with local, regional, national and international clientele including Broadway and touring companies of Hamilton, Kinky Boots, Finding Neverland, The Color Purple and Wicked. The lead casting director on this project is Cesar A. Rocha, CSA.

Paper Mill Playhouse, located at 22 Brookside Drive in Millburn, NJ, was the recipient of the 2016 Regional Theatre Tony Award,