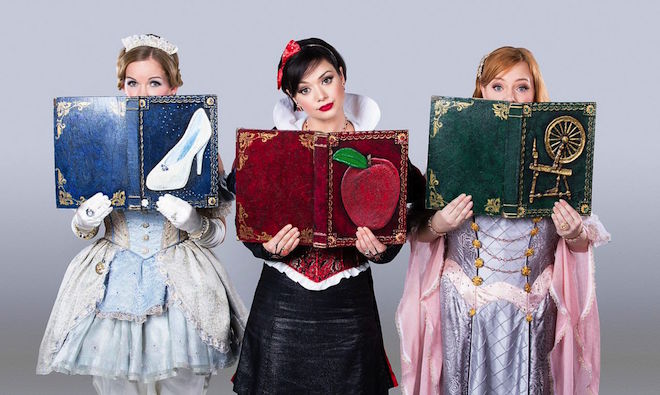 THE PRINCESSES BITE BACK IN “DISENCHANTED”

You think you know how the fairy tale goes? Think again! Off-Broadway’s hilarious new musical Disenchanted turns the stories of your favorite princesses upside-down and “fairy tales will never be the same!”

Playing a limited engagement through January 25 at the Theatre at St. Clement’s on 46th Street, Disenchanted is a new musical that has played to sold-out audiences nationwide before its arrival in New York. The show features a cast of six supremely talented ladies playing the parts of Sleeping Beauty, Belle, Rapunzel, The Little Mermaid, Cinderella, Snow White, Mulan, Pocahontas, and The Princess Who Kissed the Frog. But these princesses aren’t exactly how you remember them. In this not-made-for-children fairy tale, the princesses have a new comedic take on their traditional stories. Press for the show boasts “And they lived happily ever after! Well… not exactly.”

The cast of Disenchanted boasts an impressive list of credits. The ladies’ credits include Broadway’s Jesus Christ Superstar, Dance of the Vampires, Les Miserables, Grease, and Brighton Beach Memoirs. Disenchanted’s book, music, and lyrics were composed by the award-winning Dennis T. Giacino, and is directed by the supremely talented Fiely A. Matias (who has previously directed the out-of-town productions of Disenchanted).

Reviews for the musical have been extremely positive. Broadway World says “I had to wipe away the tears of laughter from my eyes… I will see this one AGAIN and AGAIN!” And the New York Post raves “Riotous! Side-Splitting! Should have poor Walt Disney spinning in his grave!”

The show is only playing a limited run, so make sure to get your tickets while you still can. With a talented cast, clever new songs, and laughs that keep on coming, you’ll definitely be glad you did.