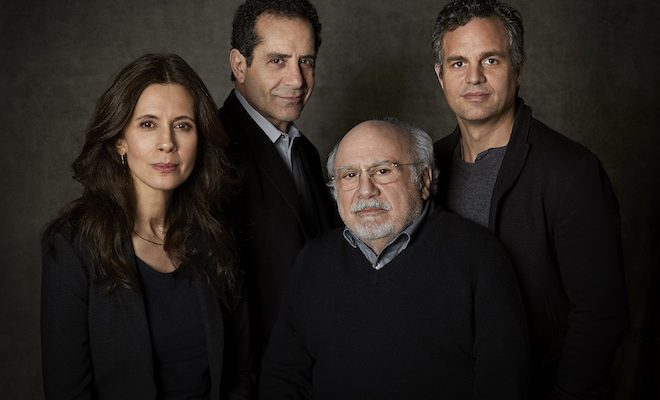 Limited engagement on Broadway at the American Airlines Theatre

Arthur Miller’s The Price opens officially on Thursday, March 16, 2017. This is a limited engagement through May 7, 2017 on Broadway at the American Airlines Theatre (227 West 42nd Street).

When the Great Depression cost his family their fortune, Victor Franz (Ruffalo) gave up his dream of an education to support his father. Three decades later, Victor has returned to his childhood home to sell the remainder of his parents’ estate. His wife, his estranged brother, and the wily furniture dealer hired to appraise their possessions all arrive with their own agendas, forcing Victor to confront a question, long-stifled, about the value of his sacrifice. One of the most personal plays by the consummate voice of the American everyman, Arthur Miller’s The Price is a riveting story about the struggle to make peace with the past and create hope for the future.

Roundabout has an extensive history with Arthur Miller, most recently presenting After the Fall in 2004 and The Man Who Had All the Luck in 2002 on the American Airlines stage. Other productions include a Tony nominated production of The Price in 1992 and All My Sons (1974 & 1997), The Crucible (1989), and the Tony winning revival of A View from the Bridge (1997).

Partial underwriting support for Arthur Miller’s The Price is provided by the Laura Pels International Foundation for Theater.

TICKET INFORMATION:
Tickets for The Price are available by calling 212.719.1300, online at roundabouttheatre.org, and in person at any Roundabout box office: American Airlines Theatre Box office (227 West 42nd Street); The Harold and Miriam Steinberg Center for Theatre (111 W 46th Street) and Studio 54 (254 West 54th Street). All single tickets are $69-$169.

PERFORMANCE SCHEDULE:
The Price plays Tuesday through Saturday evening at 8:00PM with Wednesday, Saturday and Sunday matinees at 2:00PM.

Roundabout’s season in 2017 includes Arthur Miller’s The Price, directed by Terry Kinney; If I Forget by Steven Levenson, directed by Daniel Sullivan; Marvin’s Room by Scott McPherson, directed by Anne Kauffman; Napoli, Brooklyn by Meghan Kennedy, directed by Gordon Edelstein; and the national tour of Sam Mendes & Rob Marshall’s Tony Award-winning production of Cabaret. The spring 2017 Roundabout Underground production is On the Exhale, a new play by Martín Zimmerman, directed by Leigh Silverman.

Roundabout’s new off-Broadway season dedicated to new work at the Harold & Miriam Steinberg Center for Theatre in 2017-2018 will include The Last Match, by Anna Ziegler, directed by Gaye Taylor Upchurch; Amy and the Orphans, by Lindsey Ferrentino, directed by Scott Ellis; Skintight, by Joshua Harmon, directed by Daniel Aukin.

Roundabout Underground’s 2017-2018 season will include Too Heavy for your Pocket, by Jiréh Breon Holder.

← Previous Story Bette Midler in ‘Hello, Dolly!’
Next Story → Girls, at some time, are masters of their fates…