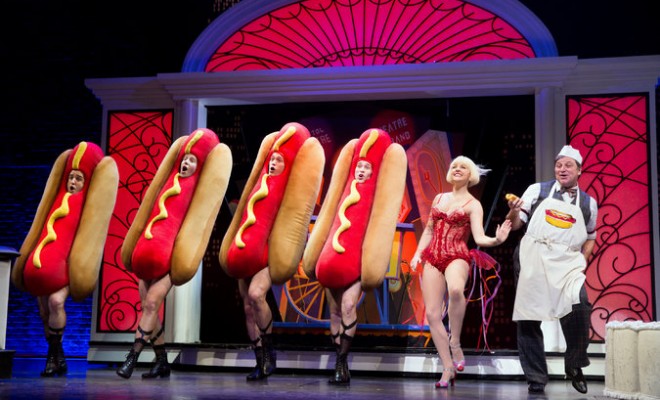 THE ONE SHOW YOU’VE GOTTA SEE, AND YOU’VE ONLY GOT 4 WEEKS TO DO IT…

With dwindling numbers and lackluster audience turnout, shows are folding left and right, leaving vacancies all across the Great White Way. But that doesn’t mean you shouldn’t get your tickets to one show before it is too late…

Shows are closing. It’s just that time of year. All of the excitement surrounding the openings of the season’s hottest new shows has ended. The pre-Tony push and the post-Tony high are over.   The summer-time slump has begun, and shows like Heathers, Rocky, Newsies, Holler if Ya Hear Me, and Bullets Over Broadway are closing or have already closed. Some – like Newsies – have enjoyed a much longer run than others. But some – like Bullets Over Broadway – never really found the audience that they so desperately needed to stay afloat.

Like several of this seasons big musicals, Bullets Over Broadway suffered from mediocre reviews and snubs from the Tony Award voters. But unlike some of its neighbors, Bullets was a high-quality, big-budget show that deserved a longer Broadway life. It was announced last week that the show will close at the end of August, leaving only four weeks left to see the show – and I recommend that you do.

As a lover of the Woody Allen film of the same name, I had high expectations for this stage adaptation. And despite what many reviewers felt about the musical, I was pleasantly surprised to find that my expectations were very nearly met. An imperfect show that probably would have benefitted from an original score, Bullets Over Broadway is pretty darn good. I certainly enjoyed the show more than several of the season’s more ‘critically acclaimed’ offerings.

Zach Braff is hilarious as he steps into the role of playwright David Shayne (played by John Cusack in the film version). Braff is charismatic and endearing, and he holds his own vocally and artistically – no easy feat considering he plays opposite Broadway veteran Marin Mazzie. Ms. Mazzie takes on the role of Helen Sinclair, originated by Dianne Wiest on film. Similar to Ms. Wiest, Ms. Mazzie dives right into the over-the-top role, showing great comedic chops.

Big, show-stopping numbers, bedazzled sets, and beautiful chorus girls are all trademarks of director Susan Stroman. And as a fan of Stroman’s previous work – particularly The Producers – I found myself watching, laughing, and gleefully enjoying the show (particularly a show-stopper that includes a bunch of dancing hot dogs). The dance numbers are as fun and full of life as any of Stroman’s Producers numbers. And the book of the show – thankfully penned by Woody Allen himself – matches just the right tone of the film.

Arguably, everything there is to say about the show has been said in countless preview pieces and reviews. But there really is only one way to find out for yourself – go see it. Bullets Over Broadway is one of my favorite shows of the season. It isn’t an ‘independent darling’ and it isn’t a ‘subtle charmer’ – it is a big, brash, bold, fun musical that will unfortunately take its last bow a little too soon. Performances continue at the Saint James Theatre until August 24, so I urge you to heed this writer’s advice, and see the spectacle Bullets Over Broadway before it’s too late.