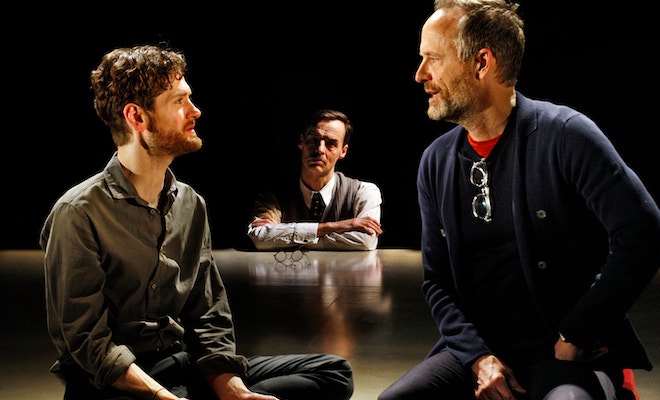 The Inheritance comes to Broadway this fall

“HERE IS THE PLAY OF THIS YEAR

AND LAST YEAR AND QUITE POSSIBLY NEXT YEAR AS WELL.”

COMING TO BROADWAY THIS FALL

“PERHAPS THE MOST IMPORTANT AMERICAN PLAY OF THE CENTURY.

A RICHLY IMAGINED WORLD THAT HAS THE INNATE THRILL OF A PAGE-TURNER.”

“A GLORIOUS SAGA OF MODERN LIFE IN NEW YORK.

MATTHEW LOPEZ HAS CREATED CHARACTERS WHO ARE FLAWED, FASCINATING, FUNNY, SELF-AWARE AND SELF-DESTRUCTIVE IN A WAY MORE LIFELIKE THAN THEATER NORMALLY HAS THE SKILL OR THE SPACE TO MANAGE.”

PIERCES YOUR EMOTIONAL DEFENSES AND ENFOLDS YOU IN ITS NARRATIVE.”

“THIS IS NOT SIMPLY THEATER. THIS IS LIFE.

AND, OH, HOW IT MAKES YOU WANT TO LIVE.”

A New Play by MATTHEW LOPEZ

WINNER OF FOUR OLIVIER AWARDS INCLUDING

To view or download a video announcing the production, please visit:https://www.dropbox.com/sh/6l4g5hwbay1edsh/AACUwkyLGWphHk22JzryokTwa?dl=0

It begins with a gathering of young, gay New Yorkers. Each has a story aching to come out…

Profoundly touching and wickedly hilarious, Matthew Lopez’s highly-anticipated two-part play, THE INHERITANCE, asks how much we owe to those who lived and loved before us, and questions the role we must play for future generations. Brilliantly re-envisioning E. M. Forster’s masterpiece Howards End to 21st-century New York, it follows the interlinking lives of three generations of gay men searching for a community of their own – and a place to call home.

THE INHERITANCE is a life-affirming journey of tears and laughter, through conflicts and connections, heartbreak and hope.  A new play, generations in the making.

Casting will be announced in the coming weeks.

THE INHERITANCE had its world premiere at London’s Young Vic Theatre from March 2 through May 19, 2018.  The acclaimed production transferred to the West End, where it played a limited engagement September 21, 2018 through January 19, 2019.

ABOUT THE CREATIVE TEAM

STEPHEN DALDRY (Director) started his career at the Sheffield Crucible Theatre and directed extensively in Britain’s regional theatres. In London he was Artistic Director of the Gate Theatre and the Royal Court Theatre where he headed the £26million redevelopment. He has also directed at the National Theatre, the Public Theatre in New York and transferred many productions both to Broadway and the West End.  His award-winning 1992 National Theatre production of An Inspector Calls is currently touring the UK. Billy Elliot the Musical has previously played in the West End, on Broadway, Australia (Sydney and Melbourne), North America, Toronto, The Netherlands, UK & Ireland Tours, Hamburg, Tokyo and Seoul. In 2009, the production won ten Tony Awards including Best Musical, more than any other British show in Broadway history. His first four films Billy Elliot, The Hours, The Reader and Extremely Loud and Incredibly Close together received 19 Academy Award® nominations and two wins. His most recent film, Trash, set in the favellas of Rio de Janeiro, was nominated for Best Film not in the English Language at the 2015 BAFTAs. Stephen’s recent productions of The Audienceand Skylight were both highly acclaimed and went on to win major theatre awards, completing sell-out runs in London and on Broadway. In 2017 Stephen directed The Jungle at the Young Vic, an intimate immersive theatrical experience about the ongoing migrant crisis in Europe. The Jungle transferred to the West End in June 2018 and has just completed a well-received run at The Curran Theatre in San Francisco. In March 2018 Stephen directed The Inheritance, Matthew Lopez’s epic two-part play, which, following its sold out run at the Young Vic, transferred to the West End.  Stephen won the 2019 Best Director Olivier Award for The Inheritance. Stephen has previously directed for BBC Radio and Television and is currently Director and Executive Producer on the Netflix series, The Crown, written by Peter Morgan, the third season of which is due to be released later in 2019. He is Director of the Pier 55 Performance Park in New York and was Creative Executive Producer of the Opening and Closing Ceremonies for the London 2012 Olympic and Paralympic Games.

Beginning Monday, June 17 at 10am EST, tickets for THE INHERITANCE will be available through Audience Rewards® (www.AudienceRewards.com), The Official Rewards Program ofBroadway & the Arts™. Members of the program will be able to purchase tickets and can continue to earn Audience Rewards® Bonus ShowPoints through Monday, June 24 at 9:59am EST.

THE INHERITANCE will be performed at the Ethel Barrymore Theater (243 West 47th street) on the following preview performance schedule, beginning September 27: Monday – Friday at 7:30pm; Saturday at 1:00pm and 7:00pm.

← Previous Story Who do you think will win the Tony?
Next Story → 2019 Tony Wins