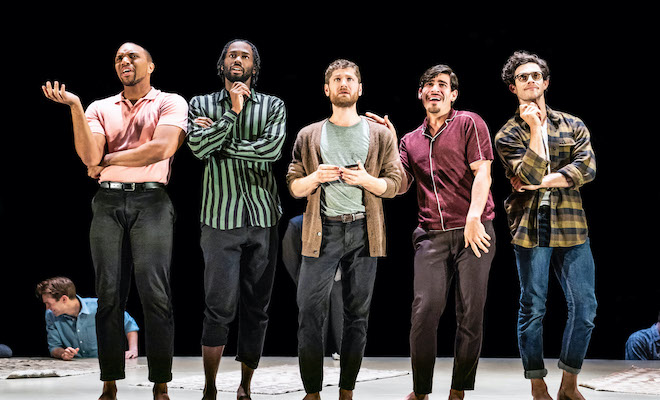 IT FLEW BY AND LEFT ME WANTING MORE.”

“A BIG BROADWAY EPIC. RIVETING, TOUCHING AND ABSORBING WITH

“AUDACIOUS AND IMPRESSIVE! The depth of feeling is ravishing and the writing utterly gorgeous. Both wonderfully funny and exquisitely poignant, this sprawling work wrecked me.”

“A BLOCKBUSTER. I CHALLENGE ANY THEATERGOER

WITH A HEART NOT TO CRY.”

“From its first preview at the Young Vic in 2018 through the West End and Broadway runs, audiences have been profoundly moved by Matthew Lopez’ beautiful play and Stephen Daldry’s stunning production,” said producers Tom Kirdahy, Sonia Friedman, and Hunter Arnold in a joint statement. “We are all extremely proud of this production and the 32 actors who bring this ambitious story to life eight times a week and honor the legacy of those we’ve lost to the AIDS epidemic.  We thank all of the actors, crew, co-producers, audience members, and community partners who have made this run such a milestone for everyone involved.”

In contemporary Manhattan, Eric and Toby are 30-somethings who seem to be very much in love and thriving. But on the cusp of their engagement, they meet an older man haunted by the past, and a younger man hungry for a future. Chance meetings lead to surprising choices as the lives of three generations interlink and collide—with explosive results.

Brilliantly re-envisioning E.M. Forster’s masterpiece Howards End to 21st-century New York, THE INHERITANCE asks how much we owe those who lived and loved before us, questions the role we must play for future generations, and dares us to fearlessly hold on to the wild ride called life.

THE INHERITANCE had its world premiere at London’s Young Vic Theatre from March 2 through May 19, 2018. The acclaimed production transferred to the West End, where it played a limited engagement September 21, 2018 through January 19, 2019.

Tickets for THE INHERITANCE are available by calling 212-239-6200 or by visiting Telecharge.com.