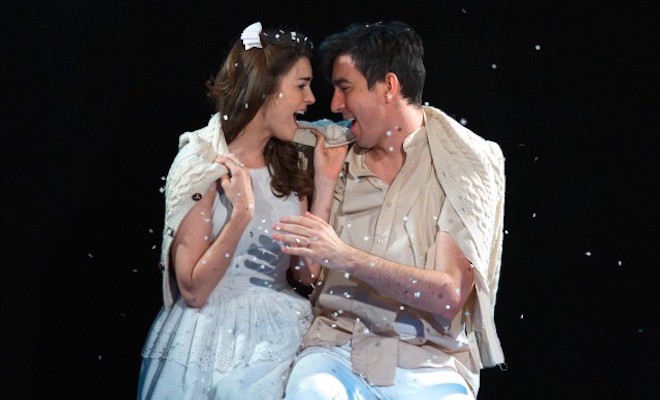 (New York, NY) – Producers of Off-Broadway’s THE FANTASTICKS have announced that the long running musical will close on Sunday, May 3rd – the 55th anniversary of the opening of the show in 1960. At the time of its closing the production will have played a total of 20,672 performances in NYC: 17,162 at the Sullivan Street Playhouse and 3,510 performances at the Snapple Theater Center.

A modern twist on Romeo and Juliet, THE FANTASTICKS (music by Harvey Schmidt, book, lyrics, and direction by Tom Jones) is the quintessential story of a boy and girl who fall in love and then quickly grow apart when they realize they want to experience the world. What follows is a hilarious and heartwarming story appropriate for all ages. The score, which includes the hit songs “Try To Remember”, “Soon It’s Gonna Rain” and “They Were You”, is as timeless as the story itself.

During its original run at the Sullivan Street Playhouse in Greenwich Village, The Fantasticks logged a record-breaking 17,162 performances. When the original production closed in 2002, news of the closing made the front page of The New York Times. In 2006, the revival opened at The Theater Center, directed by Tom Jones (author and lyricist). Variety calls the revival, “A close re-creation that happily replicates the original’s charms.” The Fantasticks continues to run at The Theater Center, making record-breaking history with each performance.

Hailed as “A Gem” by The Wall Street Journal, THE FANTASTICKS is not only the “perfect first musical for any child to see” (amNewYork), but The Fantasticks at The Theater Center is the definitive way to see the show.

The play has become a true New York institution. For many people, seeing THE FANTASTICKS when visiting New York is as important as seeing The Statue of Liberty or The Empire State Building. In fact, Mayor Michael Bloomberg attended the New Year’s Eve performance of the show before ringing in 2008 in Times Square. In 1992 The Fantasticks won The Tony Award for Excellence and remains the only Off-Broadway show ever to have won a Tony.

The current cast of THE FANTASTICKS features Edward Watts as the Narrator (El Gallo), Daniel Berryman as The Boy (Matt), Samantha Bruce as The Girl (Luisa), Donald Corren as The Boy’s Father (Hucklebee), Joe Dellger as The Girl’s Father (Bellomy), MacIntyre Dixon as The Old Actor (Henry), Michael Nostrand as The Man Who Dies (Mortimer) and Drew Siegla as The Mute. The production also features Dave Schoonover, Rita Markova, and Tom Flagg.

Performances of THE FANTASTICKS are on Mondays, Tuesdays and Fridays at 8PM, Wednesdays at 2PM, Saturdays at 2PM & 8PM and Sundays at 3PM & 7:30PM.

Tickets to THE FANTASTICKS are priced at $76.50 and can be purchased by calling the box office at (212) 921-7862, by logging onto www.Ticketmaster.com or by visiting the Snapple Theater Center box office. A limited number of premium front row seats are available for each performance priced at $126.50.

THE FANTASTICKS plays at The Jerry Orbach Theater in the Snapple Theater Center, 210 West 50th Street at Broadway. The box office phone number is (212) 921-7862. www.SnappleTheater.com