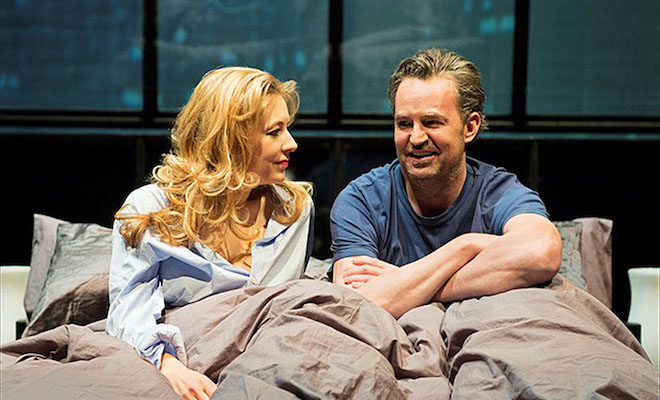 New York, NY – MCC THEATER (Robert LuPone, Bernard Telsey, William Cantler, Artistic Directors; Blake West, Executive Director) today announced complete casting for the American Premiere of the play The End of Longing, a new play written by and starring “Friends” star Matthew Perry in his NYC playwriting and stage acting debuts. Joining Perry in the MCC production will be “Once Upon a Time” and “House” star Jennifer Morrison alongside stage and television regulars Quincy Dunn-Baker and Sue Jean Kim. The End of Longing, directed by Lindsay Posner, arrives in New York following its hit run at London’s Playhouse Theatre last year. Performances in NYC begin on May 18, 2017 ahead of a June 5 opening night at the Lucille Lortel Theatre (121 Christopher Street). Tickets start at $30 for preview performances (May 18 – June 4) and start at $49 from June 5 onward. For tickets and info, visit www.mcctheater.org.
The design team for MCC’s The End of Longing includes scenic design by Tony® and Emmy® Award winner Derek McLane, costume design by Sarah Laux, lighting design by 2-time Tony® Award nominee Ben Stanton, and sound design by Ryan Rumery. Casting is by Telsey + Co/William Cantler, C.S.A.
An alcoholic, an escort, a self-diagnosed neurotic and a well-intentioned dimwit walk into a bar… Broken and deeply flawed, they find their lives irreversibly entwined no matter how hard they try to break free of one another. The End of Longing is a bittersweet comedy that proves that broken people don’t need to stay broken.
Matthew Perry currently stars and executive produces on the CBS comedy “The Odd Couple,” and will next be seen as Ted Kennedy in “The Kennedys: After Camelot,” a Reelz Channel original miniseries, as well as CBS’s “The Good Fight,” reprising his role of ‘Mike Kresteva’ that he first portrayed on “The Good Wife.” He is best known for the iconic comedy series “Friends” on which he starred as ‘Chandler Bing’ for the show’s entire 10-season run, earning an Emmy Award nomination for Lead Actor in a Comedy Series and winning the Screen Actors Guild Award for Performance by an Ensemble in a Comedy Series, among many other honors. A versatile screen actor, he also received two Emmy Award nominations for his memorable guest performance on “The West Wing” and Emmy, Screen Actors Guild and Golden Golden nominations for his lead performance in the TNT miniseries “The Ron Clark Story,” one of highest-rated original movies in the network’s history. His other television credits include Aaron Sorkin’s critically acclaimed “Studio 60 on the Sunset Strip,” the NBC comedy “Go On,” “Mr. Sunshine,” NBC’s hit “Scrubs” (for which he also made his TV directorial debut), and as host of the 2005 “ESPY Awards.” His extensive film credits include hits 17 Again, The Whole Nine Yards and its sequel The Whole Ten Yards, Three to Tango, Fools Rush In, Almost Heroes, Serving Sara, A Night in the Life of Jimmy Reardon, plus independent features Birds of America and Numb. On stage, Perry made his stage debut in London’s West End in the spring of 2003 in David Mamet’s Sexual Perversity in Chicago, which broke the record for the largest box-office advance for a West End show. Last year, he starred in the smash hit West End debut of his play The End of Longing.

Jennifer Morrison is an actress, director and producer who, in April 2016, launched her own production company, Apartment 3C Productions. Morrison makes her feature directorial debut for the banner with Sun Dogs, starring Michael Angarano, Allison Janney, Ed O’Neill and Melissa Benoist. Her first foray into directing was her short film Warning Labels, which premiered at the Tribeca Film Festival in April 2015, followed by four individual music videos for the English alt-rock band, Wild Wild Horses. On television, she is known for playing ‘Emma Swan’ in ABC’s hit drama series “Once Upon a Time” as well as ‘Dr. Allison Cameron’ on Fox’s critically acclaimed drama “House.” In film, she is known for her roles in Gavin O’Connor’s Warrior and J.J. Abrams’ Star Trek among many others. Morrison hails from Chicago, where she studied with the celebrated Steppenwolf Theatre Company and earned a degree in theater from Loyola University.

Sue Jean Kim has appeared on stage in: Aubergine, Assistance, Drunken City and BFE (Playwrights Horizons), The Chinese Room (Williamstown Theatre Festival), 10 Out of 12 (Soho Rep), Water by the Spoonful (Second Stage), The Hallway Trilogy (Rattlestick). Film/TV: Maggie’s Plan, James White, Bachelorette, “The Blacklist,” “Elementary,” “Falling Water,” “Girls,” “High Maintenance,” “Alpha House,” “Cop Show” (regular), “Delocated” (recurring), “Do No Harm” (recurring), “A Gifted Man” (recurring), “Nurse Jackie.”
Director Lindsay Posner was associate director at the Royal Court Theatre from 1987 to 1992, where his production of Death and the Maiden won two Olivier Awards. Other Court productions in that period include: The Treatment, Colquhoun and MacBryde, American Bagpipe, Ficky Stingers, No One Sees the Video, Built on Sand, Blood, Downfall and Ambulance. Theatre credits include: The Truth (Menier Chocolate Factory), The End of Longing (The Playhouse Theatre), Dinner with Saddam and Communicating Doors (Menier Chocolate Factory), Hay Fever (Theatre Royal Bath and West End), Harvey (Birmingham Repertory Theatre and West End), Speed-the-Plow (Playhouse), Other Desert Cities and The Provok’d Wife (Old Vic), The Winslow Boy (Old Vic and Roundabout, New York), The Hypochondriac and A Little Hotel on the Side (Theatre Royal Bath), Relatively Speaking (Theatre Royal Bath, West End and UK tour), Noises Off (Old Vic, West End and UK tour), Richard III (Old Globe, San Diego); Abigail’s Party (Menier Chocolate Factory, West End and UK tour), Butley and The Birthday Party (Duchess), Uncle Vanya and An Ideal Husband (Vaudeville), The Turn of the Screw, Tom and Viv, House of Games, Romance and The Hypochondriac (Almeida), A View From the Bridge (Duke of York’s – nominated for four Olivier Awards), Carousel (Churchill Theatre, UK tour and Savoy); Fiddler on the Roof (Sheffield Crucible and Savoy), Fool for Love and A Life in the Theatre (Apollo), Oleanna (Garrick), Calderón’s The Doctor of Honour (Cheek by Jowl at the Donmar), The Caretaker (Bristol Old Vic), Sexual Perversity in Chicago (Comedy), Power and Tartuffe (National Theatre), Twelfth Night, The Rivals, Volpone and The Taming of the Shrew (Royal Shakespeare Company), The Misanthrope and American Buffalo (Young Vic), The Lady From the Sea (Lyric Hammersmith/West Yorkshire Playhouse), The Seagull (Gate, Dublin) and The Robbers (the Gate). Opera credits include: La traviata and Tosca (Grange Park), Giulio Cesare (Royal Opera House), Love Counts (Almeida), Jenůfa (Opera Theatre Company, Dublin), Man and Boy: Dada (Almeida and Montclair Theatre, USA), and Rigoletto and Roberto Devereux (Holland Park).
MCC Theater broke ground on its first permanent home— a two-theater complex on West 52nd Street and 10th Avenue—on March 22, 2016. Set to open in 2018, the space will unite MCC’s diverse roster of programs under one roof for the first time in the company’s three-decade history. The new facility will also allow MCC to expand its programming and establish it as a cultural anchor within the Clinton neighborhood. The $35 million project is funded by a public-private partnership between the Theater and the City of New York, with $30 million raised to-date.
About MCC Theater
MCC is one of New York’s leading nonprofit Off-Broadway companies, driven by a mission to provoke conversations that have never happened and otherwise never would. Founded in 1986 as a collective of artists leading peer-based classes to support their own development as actors, writers and directors, the tenets of collaboration, education, and community are at the core of MCC Theater’s programming. One of the only theaters in the country led continuously by its founders, Artistic Directors Robert LuPone, Bernard Telsey, and William Cantler, MCC fulfills its mission through the production of world, American, and New York premiere plays and musicals that challenge artists and audiences to confront contemporary personal and social issues, and robust playwright development and education initiatives that foster the next generation of theater artists and students.

Plays and musicals developed by the company have gone on to stagings around the globe. Notable productions over the course of the company’s 30-year history include Robert Askins’ Hand to God, nominated for five Tony Awards and transferred to London’s West End; Sharr White’s The Other Place, starring Laurie Metcalf; The Submission by Jeff Talbot, winner of the inaugural Laurents/Hatcher Foundation Award for new American plays; Bryony Lavery’s Frozen, a 2004 Tony nominee for Best Play and winner for Brian F. O’Byrne’s performance; Wit by Margaret Edson, winner of the Pulitzer Prize for Drama in 1999; the classic cult musical Carrie, which has gone on to international productions since the Theater’s extensive redevelopment work and staging in 2012, the first in more than two decades; and ten plays by Playwright-in-Residence Neil LaBute, including Fat Pig; reasons to be pretty, a 2009 Tony nominee for Best Play; Reasons to Be Happy; and All The Ways To Say I Love You . Blake West joined the company in 2006 as Executive Director. MCC will open its first permanent home in 2018 in Manhattan’s Clinton neighborhood, unifying the company’s activities under one roof for the first time and expanding its producing, artist development, and education programming. The Theater is currently in the midst of a $35 million campaign to support its expansion and growing artistic operations, with $30 million raised to-date.