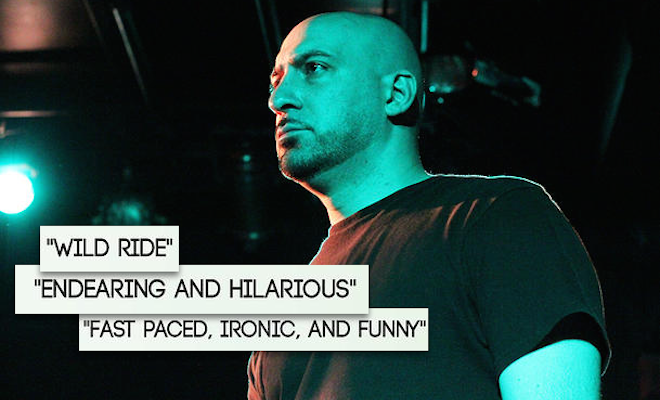 Joe Assadourian’s play, The Bullpen, now playing at The Playroom Theatre in midtown, takes you somewhere few us will ever see ( if we’re lucky), bringing to vivid life eighteen denizens of the criminal justice system, most of them awaiting arraignment in a holding cell. The play moves like lightning from beginning to end, with each character clearly drawn and vividly acted.

Something that will make my opening statement even more compelling is the fact that The Bullpen is a solo piece!

It’s a little bit mind-blowing. You see, The Bullpen is Mr. Assadourian’s story. I will bet you that very few actors trained in the finest academies could top what he accomplishes. Every character is unique, both vocally and physically, and most of them have strong accents making the fluid transition from one to the other doubly challenging. I say transition, but really it’s so seamless that you come to believe the characters are there interacting with each other. Mr. Assadourian’s timing is exquisite. Early in the play, when he is first escorted into the bullpen (Joe: I have to get in there with them? Guard: For now you are them.), he meets a person who says something so fast in such a thick accent he doesn’t understand. The young Dominican then says it more slowly, so you can understand what he’s saying (something about Derek Jeter) and then speeds it up again. It’s hilarious, and considering that this is a three way exchange (there is also a translator), it’s a great example of the feat this production accomplishes.

And just wait until the curtain call! I’d love to say something about it but I don’t want to spoil the surprise.

A word about the director. Nobody acts in a vacuum, having done several solo pieces myself, I know the value that the extra pair of eyes and ears brings to the table, from both a directing and a dramaturgical standpoint. Richard Hoehler teaches in the prison that Mr. Assadourian served time in; I know nothing for sure about the gestation of the piece, but what I do know is that what the two of them have crafted together is a stunning experience.

To my mind this is one of the best theater values in the city right now: a haunting and very funny play, well acted, in a nice intimate space in mid-town . . . and even if you don’t get a deal via TKTS or TDF it’s still only $30!

After the play, I let the crowd hit the elevators first, and waited for them to clear out. Out comes Mr. Assadourian to greet people, my wife and I introduce ourselves as fellow actor/writers and Joe says, ‘I’m an actor now too, or that’s what they tell me.’

You better believe it.

Ric Siler is an actor and playwright from West Virginia, now living in Nyack, whose most recent play is Working Man Blues, the third play in a trilogy about coal miners.