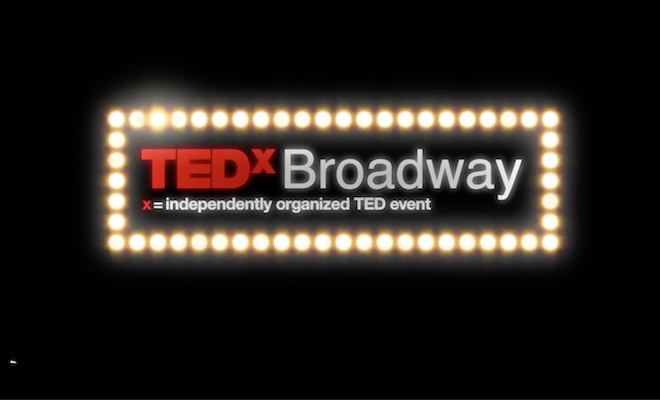 New York, NY (November 12, 2015) —When the fifth annual TEDxBroadway returns Monday, February 22, 2016 to New World Stages in New York City, so too will the Young Professional and Student Programs in “The Loft.” The organizers of the one-day event that asks “What is the Best Broadway Can Be?” invite the next generation to help shape the future of Broadway.

“Because TEDxBroadway sells out every year we wanted to make sure that the young professionals in the Broadway ecosystem have an opportunity to participate, collaborate, and shape their future,” says Damian Bazadona, founder of Situation Interactive and TEDxBroadway Co-organizer.

The TEDxBroadway Loft is a space for the 58 members of the Young Professional and Student Programs to exchange ideas and information with their peers. The Loft will create an environment in which the young professionals and students can network, voice their opinions, insights, and build relationships for later initiatives. The TEDxBroadway Loft and Young Professional Program are being underwritten by The Nederlander Organization and The Shubert Foundation.

“There’s a buzz in that loft. Even from the stage I can feel the energy, the excitement and the enthusiasm,” adds Jim McCarthy, CEO, Goldstar and Co-organizer, TEDxBroadway. “Don’t worry though. Just because you’re not in the Young Professional Program or a Student, that doesn’t mean you’re not allowed to go up there.”

TEDxBroadway Young Professionals:
Applications are now being accepted for the program. Each selected participant gets one free ticket to TEDxBroadway. They will also be invited into a private social group with opportunities to engage with other young professionals, as well as opportunities to interact with professionals and leaders in the Broadway community before, during, and after the conference.

To apply to attend TEDxBroadway 2016 as a Young Professional:
· Submit an application by Thursday, December 31st, 2015. https://situation.wufoo.com/forms/tedxbroadway-2016-young-professionals-application/
· Be under 30-years-old as of February 22, 2016.
· Work in a field that touches the Broadway ecosystem.

TEDxBroadway Student Program:
Select graduate students from area schools including Yale, Brooklyn College, Columbia and NYU will be nominated by their professors to receive a free ticket to TEDxBroadway. They will be invited to also attend meeting and events with the Young Professionals, industry professionals and established leaders in the community surrounding the conference. Their tickets have been underwritten by Disney Theatricals.
Previously announced speakers at this year’s event include (additional speakers will be announced later): James Lecesne (writer, storyteller and actor), Katie Sweeney (‘Autism Warrior Mom’), Randy Weiner (producer, venue owner, and playwright) and Jennifer Ashley Tepper (Director of Programming for 54 Below).

TEDxBroadway is co-organized by Damian Bazadona, founder of Situation Interactive and Jim McCarthy, CEO of Goldstar. They are proud to welcome back co-organizing sponsors: Jujamcyn Theaters and Broadway.com.

Additional details are available at: http://TEDxBroadway.com
Interested attendees can purchase tickets at: https://www.eventbrite.com/e/tedxbroadway-2016-tickets-17781528029

About TED: TED is a nonprofit organization devoted to Ideas Worth Spreading. Started as a four-day conference in California 26 years ago, TED has grown to support those world-changing ideas with multiple initiatives. At TED, the world’s leading thinkers and doers are asked to give the talk of their lives in 18 minutes. Talks are then made available, free, at TED.com. TED speakers have included Bill Gates, Jane Goodall, Elizabeth Gilbert, Sir Richard Branson, Benoit Mandelbrot, Philippe Starck, Ngozi Okonjo-Iweala, Isabel Allende and former UK Prime Minister Gordon Brown. Two major TED events are held each year: The TED Conference takes place every spring in Long Beach, California (along with a parallel conference, TEDActive, in Palm Springs), and TEDGlobal is held each summer in Edinburgh, Scotland. For information about TED’s upcoming conferences, visit http://www.ted.com/registration.