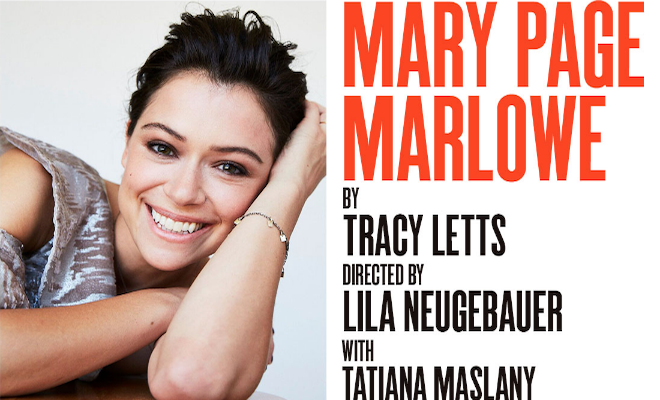 In this “deeply moving” (Chicago Tribune) new play, the title character is portrayed by five actresses at different points in her life. Casting of the additional actresses will be announced shortly.

MARY PAGE MARLOWE will begin previews on June 19, 2018 at the Tony Kiser Theater (305 West 43rd street) and will officially open on July 12.

If you looked back on eleven moments from your life, would you recognize yourself, or would you see a stranger? Mary Page Marlowe is a seemingly ordinary accountant from Ohio who has experienced pain and joy, success and failure. In this sweeping but intimate play, Tracy Letts gives us a haunting portrait of a complex woman, demonstrating how a series of forgotten moments can add up to one memorable life.

Subscriptions are currently available beginning at $250, including the company’s inaugural productions on Broadway – LOBBY HERO and STRAIGHT WHITE MEN. For subscription and ticket information, please visit 2ST.com or call the Second Stage Box Office at 212-246-4422.

TATIANA MASLANY is an Emmy Award-winning actress who has garnered numerous accolades for her film and television roles. In 2010 she received the Sundance Breakout Actress Award, in 2014 she was nominated for a Golden Globe Award and in 2015 she received her first Emmy Award nomination and went on to win the 2016 Emmy Award for Outstanding Lead Actress in a Drama Series for “Orphan Black.” This past year brought Maslany to the large and small screen, with a starring role opposite Jake Gyllenhaal in the film, Stronger, based on a memoir by a Boston Marathon bombing survivor, and the 5th and final season of BBC America’s “Orphan Black.” In “Orphan Black,” she plays several women who are revealed to be clones, a role that has also earned her, in addition to the Emmy, two Critics Choice Awards, two TCA Award nominations and one win, a Young Hollywood Award, four Canadian Screen Awards and a SAG Award nomination.

Maslany previously starred in Two Lovers and a Bear alongside Dane DeHaan, directed by Oscar-nominated Kim Nguyen, which premiered at the Cannes International Film Festival and at the Toronto Film Festival. She also starred in The Other Half, opposite Tom Cullen, which premiered at the 2016 SXSW Film Festival. In 2015, Maslany was seen in The Weinstein Company’s The Woman in Gold, starring alongside Helen Mirren and Ryan Reynolds. Simon Curtis directed the film, in which she plays the young Helen Mirren character. She is currently in production on Destroyer alongside Nicole Kidman and recently wrapped production on Pink Wall opposite Jay Duplass.

Her starring role in Grown Up Movie Star opposite Shawn Doyle competed at the Sundance Film Festival in 2010, where she garnered the Special Jury Prize for Breakout Star as well as a Genie nomination. Chosen as one of its “Rising Stars” at the 2012 Toronto International Film Festival, Maslany earned Best Performance awards from the Whistler International Film Festival and ACTRA for her role as the troubled, promiscuous teenager Claire in Picture Day. Her feature credits also include Cas and Dylan, The Vow, Violet and Daisy, and Blood Pressure.

Maslany’s numerous television credits include the Tandem and Scott Free Production, “World Without End” based on the novel by Ken Follett, a Gemini-nominated performance as the Virgin Mary in the BBC/CBC co-production “Nativity,” and Gemini-winning roles in “Flashpoint” for CBS and CTV, and “Bloodletting and Miraculous Cures” for TMN. She was also seen in a two-episode arc of NBC’s hit show “Parks and Recreation.” She has appeared on stage in Toronto in The Secret Garden, George Dandin, A Christmas Carol (all at the Globe Theatre), and Dog Sees God (Six Degrees Theatre). Mary Page Marlowe will mark her New York stage debut. Maslany is represented by ICM and The Characters Talent Agency.

Under the artistic direction of Carole Rothman, SECOND STAGE THEATER produces a diverse range of premieres and new interpretations of America’s best contemporary theatre, including 2015 Pulitzer Prize winner Between Riverside and Crazy by Stephen Adly Guirgis; 2010 Pulitzer Prize winner Next to Normal by Tom Kitt and Brian Yorkey; 2012 Pulitzer Prize winner Water by the Spoonful by Quiara Alegria Hudes; The Last Five Years by Jason Robert Brown; Dogfight by Benj Pasek, Justin Paul and Peter Duchan; Dear Evan Hansen by Benj Pasek, Justin Paul, and Steven Levenson; By the Way, Meet Vera Stark by Lynn Nottage; Trust and Lonely, I’m Not by Paul Weitz; The Elaborate Entrance of Chad Deity by Kristoffer Diaz; Everyday Rapture and Whorl Inside a Loop by Dick Scanlan and Sherie Rene Scott; Let Me Down Easy by Anna Deavere Smith; Becky Shaw by Gina Gionfriddo; Eurydice by Sarah Ruhl; The Little Dog Laughed by Douglas Carter Beane; Metamorphoses by Mary Zimmerman; The 25th Annual Putnam County Spelling Bee by William Finn and Rachel Sheinkin; Jitney by August Wilson; Jar the Floor by Cheryl L. West; Uncommon Women and Others by Wendy Wasserstein; Crowns by Regina Taylor; Saturday Night by Stephen Sondheim; Afterbirth: Kathy & Mo’s Greatest Hits by Mo Gaffney and Kathy Najimy; This Is Our Youth by Kenneth Lonergan; Ricky Jay and His 52 Assistants by Ricky Jay; Coastal Disturbances by Tina Howe; A Soldier’s Play by Charles Fuller; Little Murders by Jules Feiffer; The Good Times Are Killing Me by Lynda Barry; and Tiny Alice by Edward Albee.

In 1999, Second Stage Theater opened The Tony Kiser Theater, its state-of-the-art, 296-seat theatre, designed by renowned Dutch architect Rem Koolhaas. In 2002, Second Stage launched “Second Stage Theater Uptown” series to showcase the work of up and coming artists at the McGinn/Cazale Theater. The Theater supports artists through several programs that include residencies, fellowships and commissions, and engages students and community members through education and outreach programs.

Second Stage Theater purchased the historic Helen Hayes Theater, located at 240 W. 44th Street, in 2015. The company will continue to lease and operate their original theaters on the city’s Upper West Side and in Midtown Manhattan. Second Stage Theater enlisted David Rockwell and The Rockwell Group to make renovations and updates to the 106-year-old landmark building.

Second Stage Theater is investing in its future on Broadway by co-commissioning established playwrights through its STAGE-2-STAGE program, launching with Los Angeles’s Center Theatre Group. This ongoing program will provide a pathway to Broadway, with each play receiving an initial production in Los Angeles at one of CTG’s three theatres before moving to New York. The commissioned playwrights are Jon Robin Baitz, Will Eno, Lisa Kron, Young Jean Lee, Lynn Nottage, and Paula Vogel.