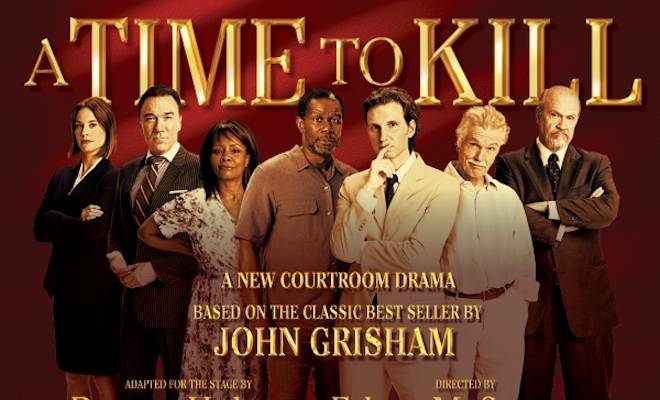 A TIME TO TALK BACK

New York, NY – Producers of the new Broadway play A Time to Kill, based on John Grisham’s best-selling novel of the same name, announced today that high-profile defense attorney Benjamin Brafman will lead a post-show conversation with members of the cast following the Tuesday, November 5th performance. The group will discuss the current state of the justice system as it relates to the narrative of A Time to Kill. The audience of that evening’s performance will be invited to stay and participate in the dialogue, which is sure to generate a variety of reactions. A Time to Kill opened on Broadway on Sunday, October 20, 2013, at the John Golden Theatre (252 West 45th Street). This new Broadway play holds the distinction of being the first-ever John Grisham property to be adapted for the stage. Ethan McSweeny directs. Sebastian Arcelus, Chike Johnson, Patrick Page, Tony Award® winner Tonya Pinkins, Emmy Award® winner Tom Skerritt, Fred Dalton Thompson, John Douglas Thompson, and Ashley Williams plus Jeffrey M. Bender, Dashiell Eaves, J.R. Horne, John Procaccino, Tijuana Ricks, and Lee Sellars will star. A Time to Kill is produced by Tony® Award winner Daryl Roth and Eva Price. For future talkback information as well as tickets and info, visit www.ATimeToKillOnBroadway.com.

Benjamin Brafman is the principal of a seven-lawyer firm, Brafman & Associates, P.C., located in Manhattan. Mr. Brafman’s firm specializes in criminal defense. Mr. Brafman, a former Assistant District Attorney in the New York County District Attorney’s Office, has been in private practice since 1980. Mr. Brafman was selected by New York Magazine as the “Best Criminal Defense Lawyer in New York” and was presented with the “first” ever Clarence Darrow Award for Distinguished Practitioner by the New York State Association of Criminal Defense Lawyers. Mr. Brafman has represented a wide range of high-profile celebrities, athletes, business leaders, lawyers and other professionals in significant criminal cases throughout the country, including Jay Z, Sean “P. Diddy” Combs, Plaxico Burress and Dominique Strauss-Kahn. Mr. Brafman is a Fellow in the American College of Trial Lawyers and his acquittal record in complex criminal trials in both State and Federal Courts is among the highest in New York City. He lectures widely throughout the United States on issues related to trial advocacy and is considered by many seasoned professionals as being an expert in the art of cross examination.

A Time to Kill, the popular courtroom drama, tells the emotionally charged, now-iconic story of a young, idealistic lawyer, Jake Brigance, defending a black man, Carl Lee Hailey, for taking the law into his own hands following an unspeakable crime committed against his young daughter. Their small Mississippi town is thrown into upheaval, and Jake finds himself arguing against the formidable district attorney, Rufus Buckley, and under attack from both sides of a racially divided city. This drama is a thrilling courtroom battle where the true nature of what is right and what is moral are called into question.