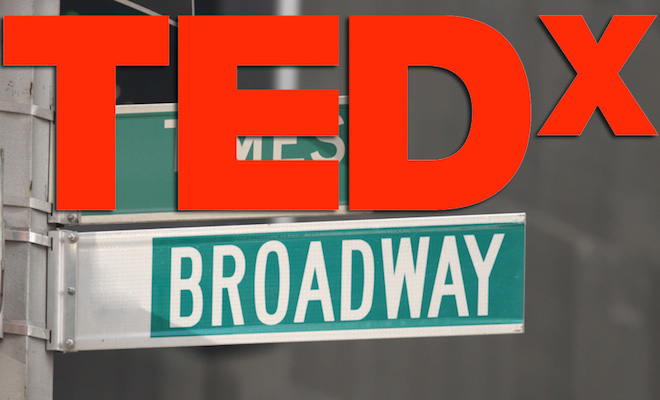 STAGE SET FOR THIRD ANNUAL TEDxBROADWAY: ANNOUNCING COMPLETE LIST OF SPEAKERS AND PERFORMERS “WHAT IS THE BEST BROADWAY CAN BE?” ONE-DAY ONLY: MONDAY, FEBRUARY 24, 2014 AT NEW WORLD STAGES

New York, NY (February 19, 2014) — Today TEDxBroadway announced the final list of speakers and performers who will join in the discussion at the third annual event.

The one-day event returning on Monday, February 24, 2014 beginning at 11:00.am. at New World Stages (340 West 50th Street) will be filled with provocative presentations, intriguing discussions and new connections that forward-thinking members of the community will want to join. Tickets are priced at $100 and may be purchased on the Goldstar website at http://www.goldstar.com/events/new-york-ny/tedxbroadway-3.

Organizers Damian Bazadona, Ken Davenport, and Jim McCarthy endeavor to provide an environment to answer the question, “What’s the BEST that Broadway can be?” They have gathered some of the smartest, most interesting people from a wide range of fields of expertise to consider this question and present their findings. However, it’s not just the people on the stage who are important to that vision, but the members of the audience, who’ll come from government, academics, Broadway production and marketing, tourism, hospitality, food service and beyond. All stakeholders in the vitality of the neighborhood of Broadway will participate in developing and sharing this vision.

Additional details are available at: http://TEDxBroadway.com

About TED: TED is a nonprofit organization devoted to Ideas Worth Spreading. Started as a four-day conference in California 26 years ago, TED has grown to support those world-changing ideas with multiple initiatives. At TED, the world’s leading thinkers and doers are asked to give the talk of their lives in 18 minutes. Talks are then made available, free, at TED.com. TED speakers have included Bill Gates, Jane Goodall, Elizabeth Gilbert, Sir Richard Branson, Benoit Mandelbrot, Philippe Starck, Ngozi Okonjo-Iweala, Isabel Allende and former UK Prime Minister Gordon Brown. Two major TED events are held each year: The TED Conference takes place every spring in Long Beach, California (along with a parallel conference, TEDActive, in Palm Springs), and TEDGlobal is held each summer in Edinburgh, Scotland. For information about TED’s upcoming conferences, visit http://www.ted.com/registration