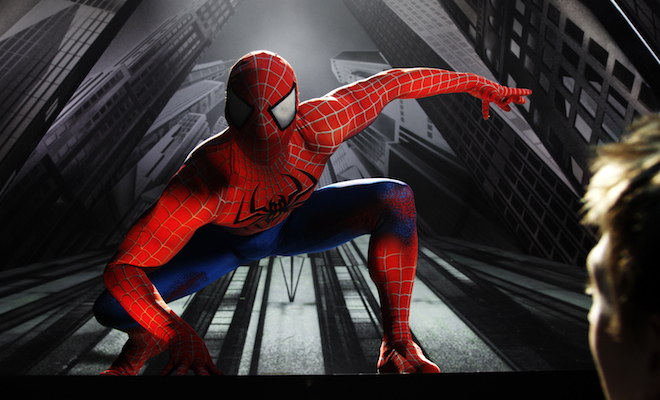 New York, NY– SPIDER-MAN Turn Off The Dark announced today that the Smithsonian Institution is inducting the Spider-Man costume worn by its original star, Reeve Carney, into the permanent collection of its National Museum of American History in Washington D.C.  This honor coincides with the production’s final performance on Broadway, taking place on Saturday, January 4, 2014, before the production moves to Las Vegas.

The custom printed spandex suit was designed for Mr. Carney’s exact dimensions by the late costume designer Eiko Ishioka.  Ms. Ishioka was nominated for a 2011 Tony® Award for her work on SPIDER-MAN Turn Off The Dark.

Producers Michael Cohl and Jeremiah J. Harris commented, “The Smithsonian Institution’s National Museum of American History is the premier archive of iconic American artifacts.  We are honored  that they have decided to cement the production’s place in the American popular culture canon.  This also serves as a fitting tribute to our incredible costume designer Eiko Ishioka.”

SPIDER-MAN Turn Off The Dark is currently the 16th highest grossing Broadway production of all time, having taken in more than $200 million at the box office.  The show has been seen by approximately two million fans, and will have played 1,268 performances by the time it takes its final bow at the Foxwoods Theatre.

The fastest show in Broadway history to reach one million audience members, SPIDER-MAN also shattered the record for the highest single-week gross of any show in Broadway history for the week ending Sunday, January 1, 2012; shattered the Broadway single-week attendance record that same week, playing to 17,375 audience members (100.02% capacity of The Foxwoods Theatre); set the weekly box office record of $2,941,790.20; and shattered the annual box office record of the Foxwoods Theatre by almost $35 million.

SPIDER-MAN Turn Off The Dark features music and lyrics by 22-time Grammy® Award-winners Bono and The Edge and a book co-written by Julie Taymor, Glen Berger and Roberto Aguirre-Sacasa, with direction by Ms. Taymor and additional direction by Philip William McKinley. Scenic Designer George Tsypin and Costume Designer Eiko Ishioka are winners of Outer Critics Circle Awards and were nominated for Tony® Awards for their work on SPIDER-MAN Turn Off The Dark.