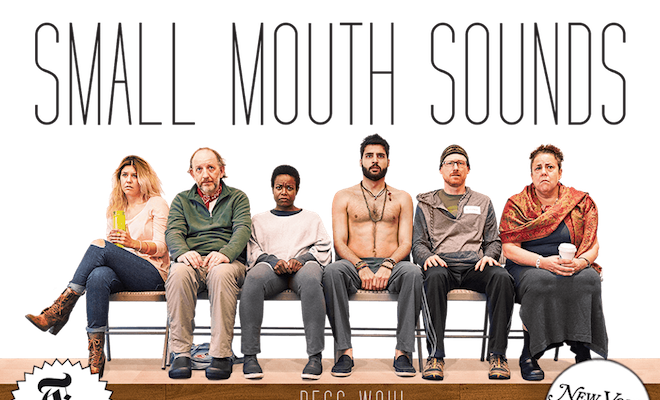 “I am thrilled to be bringing this gorgeous and entertaining theatrical gem to audiences across the United States. It’s so rare these days to have an acclaimed off-Broadway show launch a multi-city tour, which makes this even more exciting,” producer Eva Price said.

Small Mouth Sounds played a record-breaking run at Ars Nova in 2015 and an acclaimed and extended commercial production at the Pershing Square Signature Center’s Romulus Linney Theater in 2016. Small Mouth Sounds is booked for 21 weeks in multiple cities, making it one of the longest tours for an Off Broadway show of this size in recent memory.

In the overwhelming quiet of the woods, six runaways from city life embark on a silent retreat. As these strangers confront internal demons both profound and absurd, their vows of silence collide with the achingly human need to connect. Filled with awkward humor, this strange and compassionate new play asks how we address life’s biggest questions when words fail us.

The New York Times called Small Mouth Sounds “an enchanting new play… as funny as it is quietly moving… a model of ingenuity” and the show was chosen as a “Best Of” Theater Pick in the New York Times, New York Magazine, The Hollywood Reporter, New York Post, and more.

The current national tour schedule is as follows:

More information, including casting, will be announced shortly.

“Funny and ingenious! A quiet gem of a play, restaged with all its wit, compassion and sparkle fully intact. The sound of silence onstage has rarely made such sweet music. It leaves you moved, refreshed and even a little enlightened.”
-Charles Isherwood, The New York Times (Critics’ Pick)

“A play unlike any other. An unexpected theatrical joy.”
-The Huffington Post

“Touching and hilarious! An excellent, enlightening evening of theater.”
-TheaterMania

“A unique, immersive play. It feels like we have stepped out of New York City and into a calm and soothing rural place. In an age of endless distraction and chatter, Small Mouth Sounds reminds us of the power of simplicity.”
-Connecticut Post