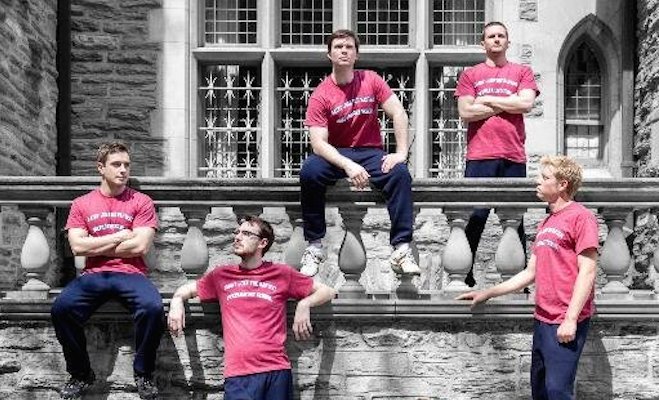 “Skin in the Game”

How far do you go to help a friend?

This is the central question resonating in Skin in the Game, an intriguing and multi-layered play written and directed by Anthony Joseph Giunta and currently running as part of the New York International Fringe Festival. If the question alone doesn’t peak your curiosity, the promotional photo might: featuring three fit, shirtless men in a locker room, this bit of clever marketing packed the house on opening night and offers just enough visible tension to make you wonder what’s going on without giving anything away.

When the lights come up, we meet Kirk Kasiminski (Chris Robertson), our central character who is trying to keep his life together amidst a mysterious series of events. He and his high school classmates Bran (Andrew Gelles) and Trent (Luke David Young) have been brought together to compete in an event match on a faraway island after which the winner will receive a full-ride scholarship to the college of his choice. They are flown on a private plane to Lough Derg, Ireland, where they meet the cryptic Andy Turnower (Evan Leone) and begin learning the real reason they’ve been called to compete. As worlds collide and past events are unearthed, the boys are forced to face a truth that they would all rather stay buried, especially Kirk.

From the get-go, this play grabs you and doesn’t let go until you are leaning in on your own in the hopes of discovering what’s really going on here. What at first seems like 50 Shades of Grey meets The Hunger Games meets Lord of the Flies is actually a deeply moving story about friendship, regret, sacrifice, and the will to move beyond the dark past. I won’t give anything away, but I will tell you that in addition to some fine performances, the best thing about this play is discovering scene-by-scene what happened that brought these characters together and the lessons they learn as a result.

Tom Schmitt shines as Patrick, Kirk’s likeable (and ripped) best friend from high school, and the performance given by Andrew Cekala as Patrick’s younger brother Jay is so genuine that it is no wonder he has already appeared on Broadway. Gelles and Young provide us with many of the show’s more comedic moments while Leone’s grounded power reminds us that he has a few tricks (and plot twists) up his sleeve. Chris Robertson is excellent in the role of Kirk and does especially well showing us his more emotional side when he finally comes to terms with the mistakes of his past.

Giunta’s writing and direction go hand-in-hand; it is clear that he knows his work like he knows his actors, because the casting is pretty spot-on and the fluidity of the actors’ exchanges feels natural because of his deep and honest script. Even though the idea of three high schoolers hopping on a plane and competing to win scholarship money might at first seem a little farfetched (did I mention that one of them might not be coming back alive?), the contemporary elements of the script actually make it seem pretty plausible, especially in a time when giving up a cell phone before beginning a competition feels like the end of the world. I particularly appreciated the simplicity of costumes, lights, and set: much is left up to the audience’s imagination in terms of visualizing the island, the flashbacks, and the tasks the boys endure, and given everything else going on in the play, I think it’s best that way. Equally enjoyable are the high school colors the boys are given to wear before they compete—colors that unite them despite the boys being very different from one another.

This play tackles many large topics, from Catholicism and sexuality to the struggles of manhood and the healing power of forgiveness. But what’s truly special about this play—and why I recommend that you see it at the Sheen Center Black Box before it closes on August 17th—is that it leaves you feeling like you genuinely learned an important lesson about how accepting your past can help you build a better future.

← Previous Story “HUMAN” AT THE NYC FRINGE FESTIVAL
Next Story → THE YOUNG ON YOUTH: “THE PICTURE (OF DORIAN GRAY)”