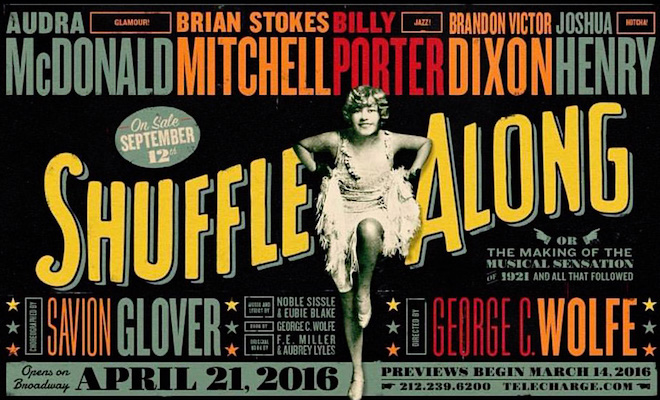 ‘Shuffle Along’ to Close When Audra Leaves

WILL PLAY ITS FINAL BROADWAY PERFORMANCE ON SUNDAY, JULY 24, 2016

New York, NY – Producer Scott Rudin announced today that SHUFFLE ALONG Or The Making of the Musical Sensation of 1921 and All That Followed, will play its final Broadway performance on Sunday, July 24, 2016. As was previously announced Audra McDonald, the six-time Tony winning star of SHUFFLE ALONG, was already set to depart the production on July 24 for what was planned as a multi-month maternity leave.

“Audra McDonald is the biggest star on Broadway, and audiences have been clamoring to see her in this role since the first preview of Shuffle Along in March of this year,” said Mr. Rudin. “She is absolutely extraordinary in the show, and I am filled with gratitude for both her exemplary partnership on Shuffle Along and also for her remarkable resilience and fortitude in doing everything possible to play as many shows as she can, despite the circumstance of her pregnancy. We are thrilled that she and her husband, Will Swenson, are experiencing the opportunity to expand their family — and we wish them all good things as they approach the birth of their child this fall. It has, however, become clear that the need for Audra to take a prolonged and unexpected hiatus from the show has determined the unfortunate inevitability of our running at a loss for significantly longer than the show can responsibly absorb, and we have decided to close the show when she leaves on July 24. On behalf of myself and George C. Wolfe, I want to say how deeply grateful we are to her for everything she gave and continues to give the show. There is simply nobody like her.”

SHUFFLE ALONG began performances on March 15, 2016 and officially opened, to rave reviews, on April 28. It went on to win the New York Drama Critics Circle and Drama Desk Awards for Best Musical, along with the Drama Desk Awards for Outstanding Choreography (Savion Glover), Outstanding Costume Design (Ann Roth), and Outstanding Wig and Hair Design (Mia M. Neal). It was nominated for ten 2016 Tony Awards, including Best Musical. It will have played 38 previews and 100 regular performances by the time it ends its run.

In a statement, Ms. McDonald said, “I am overjoyed to be expecting a new addition to my family yet completely heartbroken that our tremendously talented cast and company – my ‘Shuffle Family’ – won’t be able to continue telling this incredible story. We are all so fortunate to have worked with—and learned from—the genius that is George C. Wolfe and played a part in bringing this vital and illuminating work to life. I am eternally thankful for the support and compassion the production, especially Scott Rudin, has shown me. While a complete surprise to Will and me, this baby is one of the greatest gifts of our lives.”

Presenting elements from the 1921 musical itself, as well as detailing the events that catalyzed the songwriting team of Noble Sissle and Eubie Blake, and librettists F.E. Miller and Aubrey Lyles, to create this ground-breaking work, SHUFFLE ALONG has a new book by George C. Wolfe, is choreographed by Savion Glover, and is directed by Mr. Wolfe. SHUFFLE ALONG marks the first time that the writer/director and choreographer have worked together since their 1996 hit Bring in ‘da Noise, Bring in ‘da Funk. The production is playing at the Music Box Theatre (239 West 45th Street).

Tickets to SHUFFLE ALONG are available by calling (212) 239-6200 or visiting www.telecharge.com.

← Previous Story Tickets on sale for “Spamilton”
Next Story → test