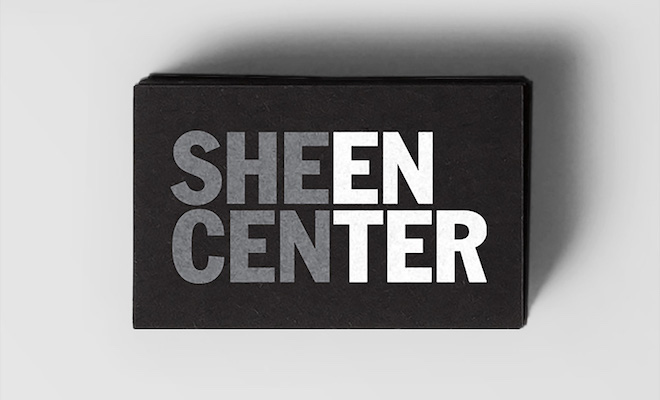 New York, NY (August 18, 2016) – The Sheen Center for Thought & Culture (18 Bleecker Street) announces the fall and winter programming of their 2016-2017 season. Featuring thought-provoking theater, film, music, poetry, art, and discourse, The Sheen Center will continue several successful series launched in their inaugural season, as well as maintain a focus on fostering new talent. Building on its first season that featured David Mamet and a re-envisioning of his play The Anarchist; Comedian Jim Gaffigan; speaker Michael Bloomberg; a panel discussion on Netflix’s Daredevil with Marvel TV; red carpet screenings and an extended run of the hit play Universal Robots by Mac Rogers, the Sheen Center continues its excellence in diverse programming.

Highlights of the upcoming season include: Brian Dennehy on Eugene O’Neill, Arthur Miller and Samuel Beckett, an evening of performance and conversation moderated by Anne Cattaneo (Sept 16); special advance film screenings featuring conversations with stars and creative team members, including 2016 Sundance award-winning The Birth of a Nation with Nate Parker (Oct 3); Capital Punishment in the Year of Mercy: A Talk with Sister Helen Prejean, subject of Dead Man Walking (Nov 15); All Falls Down: An Evening of Poetry with poetry sensation Sarah Kay, Anis Mojgani and more (Sept 10); a stage production of Gorey: The Secret Lives of Edward Gorey, in which three actors simultaneously play the enigmatic artist and writer (Dec 14 – 23; Jan 3-14); multiple concerts with Broadway Inspirational Voices curated by Michael McElroy and featuring Marva Hicks and Clarke Thorell (Jan 23; 30); Saints of New York, a lively discussion with His Eminence, Timothy Cardinal Dolan and others on the many Catholic saints who have lived in New York City (Oct 8); and Is Anybody Listening? Gospel and Pop to Rock the Soul, an inspirational series of musical events about “The Big Issues” facing the planet featuring Angela Robinson (Tyler Perry’s The Haves and Have Nots/OWN), Angela Grovey (Newsies), The Jenny Burton Experience, Julia Wade and the music of two- time Tony Award nominee Peter Link (Sept 22 – Oct 4).

The Sheen Center is pleased to announce that many of the most popular series and artists of its inaugural season will continue. The next installment of Kate Baldwin & Friends, a concert series curated by the Tony-nominated actress, will be “The Music of Georgia Stitt” featuring Ta’Rea Campbell, Jeff Kready, Graham Rowat and Elena Shaddow (Sept 18); and acclaimed artists including Irish fiddler Eileen Ivers, for a Christmas concert (Dec 14); pianist Anthony DeMare (Dec 13) and more. The Sheen Center’s second season will also kick off several new series, including two Marc Kaplan (Subculture) curated series: Classical Music Series and Convergences, a celebration of indie artists who straddle multiple artistic media (Jan 9; 14); Storyented: Raymond Arroyo in Conversation with Amazing Storytellers, featuring the New York Times Bestselling author and journalist in conversation with some of the most successful and creative storytellers of our time (Oct 2); and a series of free, public readings of new plays by established and rising star playwrights such as Bill Cain’s Daylight, a one-woman play on Dorothy Day and the much anticipated first full reading of Martina Majok’s Queens.

Named after the late Archbishop Fulton J. Sheen, best known for his popular radio and TV ministry in the 1950s and 60s, The Sheen Center for Thought & Culture is a project of the Archdiocese of New York with the mission of showcasing works in the performing and visual arts, lectures and symposia that highlight the true, the good, and the beautiful as they have been expressed throughout the ages. The state-of-the-art complex has a 274-seat proscenium theater equipped with five-camera high-definition livestream capability and a multi-track recording studio with thirty-two onstage inputs; an 80-seat black box theater; four rehearsal studios; and an art gallery. This facility is the newest arts center in Manhattan in 35 years and a great addition to the growing artistic community in the East Village/NoHo.