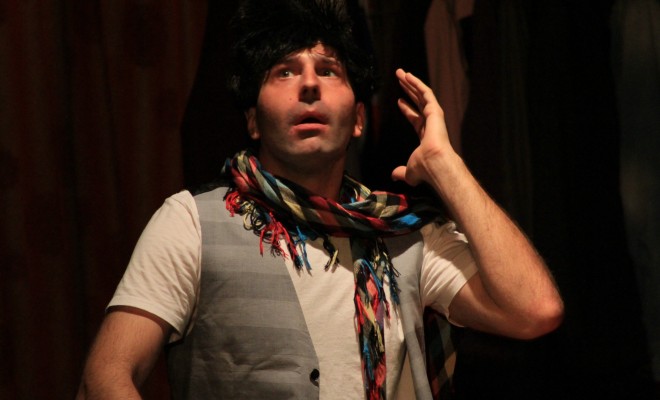 “SEVEN SEDUCTIONS OF TAYLOR SWIFT” AT THE FRINGE

Before my girlfriend Jackie and I attended this year’s Fringe Festival performance of Seven Seductions of Taylor Swift at The Players Theatre, we were intrigued by the title and what humorous situations it might address. We arrived early in order to pick up our tickets and grab a quick drink at a nearby tavern. Sitting at the bar, Jackie turned to me and asked, (in her best Barbara Walters voice) “If Seven Seductions of Taylor Swift was a drink, what would it be?” I had no idea why, but I ordered a Bloody Mary…

It is a non-guilty pleasure to watch each “comical car crash” play out, as Mr. Shafer’s characters get their own ridiculous scenes with an “invisible” Taylor Swift. Joe Jonas’ struggles with Ms. Swift (a purity ring, and his ‘Little Joe’) kick the action off with an amusing and bawdy start. The beefy Lautner’s monitoring of his cortisol levels, Mayer’s narcissistic cool dude attitude, Cory Monteith’s wayward lost soul, Gyllenhaal’s silent texting, “the state of the hook-up address” by Connor Kennedy, and Harry Styles’ “British drag queen” bits are all extremely diverse, charming, and a whole lot of silly. Helping the action move along, videographer Jonny Taylor provides funny film clips between each segment, which create continuity, and an overall excellent flow to the final product.

Seven Seductions of Taylor Swift was a blast – an absolute bangarang of lunacy, and a great date night show for me and my girlfriend. I know now that my pre-show drink choice was a forewarning of the outrageous and hilarious comedic juggling act to come – one part salty, one part sweet; intoxicating, and tasty as all hell.

← Previous Story THE YOUNG ON YOUTH: “THE PICTURE (OF DORIAN GRAY)”
Next Story → AN EXCELLENT SHOW: RUFFIN AND VAN ZURIN ARE “KINGS OF KONG” AND THEATRE