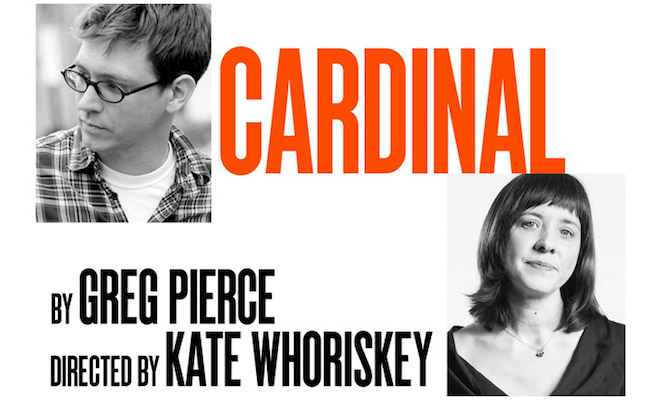 Paint it red. So begins Lydia’s wild idea to invigorate her Rust Belt town. But when a whip-smart entrepreneur co-opts her scheme, a precarious rivalry is born. A battle for the town’s soul ensues, causing its obsessive mayor, its defiant matriarch, and the rest of its residents to question who they are and where they’re headed.

Subscriptions are currently available for $345, inclusive of all five productions in the 2017/18 season, including the company’s inaugural productions on Broadway. For subscription and ticket information, please visit 2ST.com or call the Second Stage Box Office at 212-246-4422.

Casting and additional creative team members will be announced at a later date.

BIOGRAPHIES
GREG PIERCE (Playwright) grew up in Shelburne, Vermont. His play Slowgirl was the inaugural play of Lincoln Center’s Claire Tow Theater (LCT3). It was subsequently produced by Steppenwolf Theatre and the Geffen Playhouse, among others. His play, Her Requiem, a Lincoln Center Theater commission, was also produced by LCT3. The Landing, a musical written with composer John Kander, premiered at the Vineyard Theater in NYC. His second musical with Kander, Kid Victory, was co-produced by Signature Theatre in Virginia and the Vineyard Theater. The Wind-Up Bird Chronicle, co-written with director Stephen Earnhart, based on the novel by Haruki Murakami, premiered at the Edinburgh International Festival, and went on to play the Singapore Arts Festival. The Quarry, with music by Greg’s brother Randal Pierce was commissioned and produced by Vermont Stage Company. Fellow Travelers, an opera he wrote with composer Gregory Spears, based on the novel by Thomas Mallon, premiered at Cincinnati Opera. Greg has received fellowships from the Edward F. Albee Foundation, Yaddo, The Djerassi Institute, New York Public Library, and Baryshnikov Arts Center. He currently holds a commission from Manhattan Theatre Club/Sloan Foundation. His work has been developed with Naked Angels, The New Group, Atlantic Theater Company, Asia Society, the Rattlestick Theater, and the Public Theater’s Under the Radar festival. He has a BA from Oberlin College and an MFA in Creative Writing from Warren Wilson College. He is a member of the Dramatists Guild and the WGA.

KATE WHORISKEY (Director) most recently directed Pulitzer Prize-winning Sweat at Studio 54. Her work has been seen on Broadway, off-Broadway, and regionally. In New York, she has directed at Circle in the Square, the Public, Second Stage, Manhattan Theatre Club, Lincoln Center Theater, the Vineyard Theater, Theatre for A New Audience, and Playwrights Horizons. She has directed the premieres of Lynn Nottage’s Intimate Apparel, Fabulation, Ruined, and Sweat; Julia Cho’s Aubergine and The Piano Teacher; Greg Pierce’s Her Requiem, among others. She was nominated for a Drama Desk and Lucille Lortel for her work on Ruined. She has worked regionally at The Goodman Theatre, South Coast Rep, The Geffen, the American Repertory Theatre, the Shakespeare Theatre, the Huntington, Baltimore Center Stage, the Arena Stage, Oregon Shakespeare Festival, Perseverance Theatre, Actors Theatre of Louisville, Sundance Theatre Lab, The Fisher Center, and The Eugene O’Neill Center. Internationally, she directed Magdalena at the Chatelet Theatre in Paris and Teatro Municipal de Sao Paolo.

In 1999, Second Stage Theater opened The Tony Kiser Theater, its state-of-the-art, 296-seat theater, designed by renowned Dutch architect Rem Koolhaas. In 2002, Second Stage launched “Second Stage Theater Uptown” series to showcase the work of up and coming artists at the McGinn/Cazale Theater. The Theater supports artists through several programs that include residencies, fellowships and commissions, and engages students and community members through education and outreach programs.

SECOND STAGE THEATER ON BROADWAY
Second Stage Theater purchased the historic Helen Hayes Theater, located at 240 W. 44th Street, in 2015. The company will continue to lease and operate their original theaters on the city’s Upper West Side and in Midtown Manhattan. Second Stage Theater has enlisted David Rockwell and The Rockwell Group to make renovations and updates to the 104 year old landmark building.

Second Stage Theater is investing in its future on Broadway by co-commissioning established playwrights through its STAGE-2-STAGE program, launching with Los Angeles’s Center Theatre Group. This ongoing program will provide a pathway to Broadway, with each play receiving an initial production in Los Angeles at one of CTG’s three theaters before moving to New York. The commissioned playwrights are Jon Robin Baitz, Will Eno, Lisa Kron, Young Jean Lee, Lynn Nottage, and Paula Vogel.