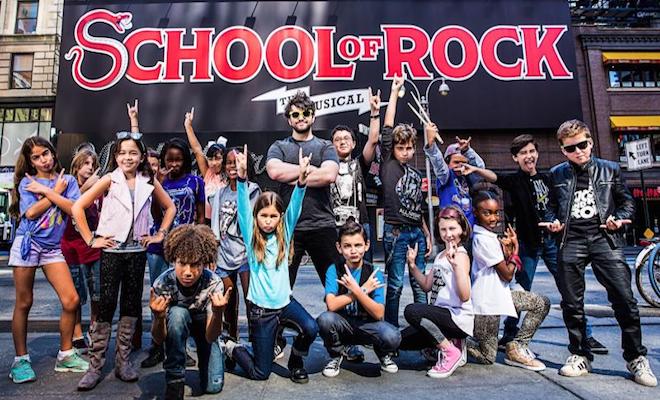 ‘School of Rock’ Has New Class

THEY’RE IN THE BAND!

Eric Petersen has been seen on Broadway, Off-Broadway, and in national tours, most notably as Shrek in Shrek: The Musical, Peter and the Starcatcher, and The 25th Annual Putnam County Spelling Bee. On television, Petersen played Arlo Barth on TVLand’s “Kristie,” and has been seen on Disney Channel’s “Jessie,” “Pair of Kings” and “Kirby Buckets.”

Alex Brightman, the original Tony Award-nominated star of School of Rock – The Musical, will play his final performance on Sunday, November 6, 2016.

Currently in performances at the Winter Garden Theatre (1634 Broadway), School of Rock – The Musical is based on the smash hit 2003 film of the same, featuring music from the movie, as well as an original score by Andrew Lloyd Webber, lyrics by Glenn Slater, a book by Julian Fellowes and direction by Laurence Connor. School of Rock – The Musical opened to rave reviews on Sunday, December 6, 2015. This Ben Brantley New York Times ‘Critics’ Pick’ “is an inspiring jolt of energy and mad skillz,” raves Jesse Oxfeld of Entertainment Weekly. And in his four-star Critics’ Pick review, Time Out’s David Cote proclaimed, “School’s IN – forever!” School of Rock – The Musical was nominated for four 2016 Tony Awards, including Best Musical, Best Score (Lloyd Webber and Slater), Best Book (Fellowes), and Best Leading Actor in a Musical (Alex Brightman).

Based on the hit film, School of Rock – The Musical is a hilarious new musical that follows Dewey Finn, a failed, wannabe rock star who decides to earn a few extra bucks by posing as a substitute teacher at a prestigious prep school. There he turns a class of straight-A students into a guitar-shredding, bass-slapping, mind-blowing rock band. While teaching these pint-

sized prodigies what it means to truly rock, Dewey falls for the school’s beautiful, but uptight headmistress, helping her rediscover the wild child within.

Andrew Lloyd Webber, once again, has the rare distinction of having three musicals running simultaneously on Broadway: School of Rock – The Musical, CATS, and The Phantom of the Opera.

School of Rock – The Musical will play London’s West End at the New London Theatre. Performance begin on October 24, 2016 with an official opening scheduled for November 14, 2016.