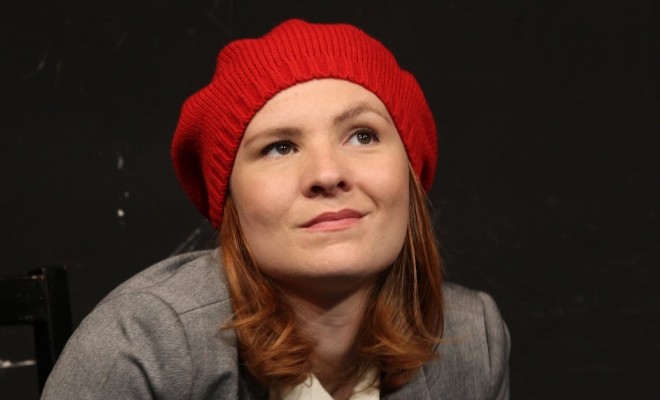 SAVING A SEAT FOR MERYL STREEP

The Pawnbroker is one of this year’s hottest FringeNYC tickets. Playwright and star Katelin Wilcox dishes on the Fringe Festival, Bertolt Brecht’s big secret, and saving a front-row seat for Meryl Streep.

It’s hard to believe it was only about six months ago that my intrepid director, Jennifer Curfman, and I were sitting at a tiny, dimly lit table in Gilbey’s pub in Astoria, finalizing our FringeNYC application in the wee hours of the morning before the deadline (Starbucks had kicked us out at closing, and it was the nearest place still open. Also: whiskey). As we paid our bar tab and sized up what we had written, we were exhausted, but excited. The application was strong and, beyond that, we both really believed in the piece we were submitting – a play I wrote called The Pawnbroker. Fast forward six months, one acceptance letter, twelve marathon rehearsals, and billions of emails about scheduling, logos, venue specs, marketing, flame proofing, and Meryl Streep, and we’re suddenly approaching opening night.

Set against the ominous backdrop of rising Nazi Germany, at a time when female writers had little prospect of making a name for themselves, The Pawnbroker introduces us to Elisabeth Hauptmann, Helene Weigel, Marianne Zoff, Margarete Steffin and Ruth Berlau – women who loved and worked with famed playwright Bertolt Brecht throughout his career and were instrumental in the creation of much of his body of work, but who have mostly faded into anonymity. Time and again, these women were each charmed, delighted, and inspired by Brecht, and also deeply wronged by him, personally, professionally, and artistically.They made extraordinary contributions to some of the world’s greatest theatre and,prior to researching this piece, I had never even heard of most of them. What began twelve years ago as a desire to give these women a voice, became The Pawnbroker -my one-woman show telling the controversial story of Brecht’s legend – and what five women lost to create it. So, full disclosure: the script I originally wrote was not really a “play.” It was more like an essay that I memorized and said aloud on a stage while wearing a costume. Five years ago, I decided to do something about that. I brought the script to my colleagues at The CRY HAVOC Company, of which Jen and I are both Resident Artists. CRY HAVOC focuses on new play development, and I honestly think the insightful feedback that goes on in that room is some of the best new-play dramaturgy happening in New York City. The result was a script that is much more exciting both for me to perform as an actor, and for the audience to experience.

Accented by Brechtian-style projected quotes from essays and reviews praising Brecht’s work, the play asks the audience to confront the discrepancy between Brecht the theatrical icon, and Brecht the man. I’ve done a few small-scale, workshop performances of the piece before, and it never fails to provoke a fascinating and lively discussion, often the first reaction mirroring my own upon hearing these accounts – “I had no idea.” Jen and I think the show is ideal for FringeNYC audiences, and we can’t wait to share it with them.

But first, we have to survive tech. Jen and I are both seasoned theatre professionals, but we are FringeNYC virgins, and producing a show in the festival has been a bit like learning a new language. We quickly discovered the importance of terms like “Chatter” (the private social media platform where all questions are asked and answered), the mythic “ACR” (house manager, but so much more), and “C-15 Fitness” (the coveted FDNY flame proofing certification). At the Town Meeting that Artistic Director Elena Holy hosted to kick things off this year, I looked around and felt simultaneously thrilled and daunted by the sheer volume of people and projects that are a part of this festival. Over 200 shows, 20 venues, and 1000 performances to coordinate load-in, tech, and changeovers for – it’s a massive undertaking, and I’m awed by the organizational wizardry that Elena and her team perform to make it happen.

Months ago, we submitted our technical specs on a wing and a prayer, hoping they could be accommodated. We were assigned a lovely, intimate, black box venue that is perfect for our piece and can accommodate a projector – our biggest request, and one that I felt was essential to the story I was trying to tell. But that period-appropriate desk we were hoping to use? Scaled back to a folding table that can be stored under the risers. Our preference to project slides onto the stage right back wall? Adjusted to a center screen that we can share with several other shows in our venue.

But in a way, having to make all these little changes has helped distill the play into its most essential form. FringeNYCis not the place for bells and whistles – it’s an opportunity for independent theatre artists to get their work out into the world. For many of us, it is the highest-profile platform our show has seen yet, and it’s up to us to make the most of it. Jen and I are dreaming big and inviting Meryl Streep to The Pawnbroker. (If you’re reading this Meryl, come see the show!)The exposure, legitimacy, and just plain excitement that come along with being a FringeNYC show are well worth the logistical whirlwind to get there. Besides, that vintage desk was too expensive anyway.

The Pawnbroker: Lies, Lovers, and Bertolt Brecht will be presented as part of the 2014 New York International Fringe Festival. Performance details:

Katelin Wilcox is an actor, playwright and director whose credits include the Shakespeare Theatre of New Jersey, The Public Theater of Maine, New York Shakespeare Exchange, and The CRY HAVOC Company, among others. She holds a BA from the University of Notre Dame, is a member of Actors Equity, and a Resident Artist with CRY HAVOC.