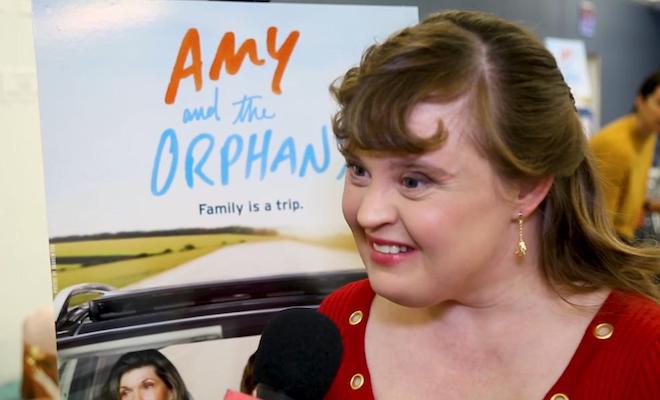 AMY AND THE ORPHANS
By LINDSEY FERRENTINO
Directed by SCOTT ELLIS

Limited engagement through April 22, 2018
Off-Broadway at the Laura Pels Theatre in the Harold and Miriam Steinberg Center for Theatre

Lindsey Ferrentino made her New York debut with her critically acclaimed play, Ugly Lies the Bone, starring Mamie Gummer in 2015 at Roundabout Underground, and returns to the Steinberg Center with her Roundabout commission, Amy and the Orphans. As part of Roundabout’s commitment to foster the talent of emerging writers, each Underground playwright is commissioned to write a new play before their Underground play is produced.

Amy and the Orphans opens officially on March 1, 2018 at the Laura Pels Theatre in the Harold and Miriam Steinberg Center for Theatre (111 West 46th Street). This will be a limited engagement through April 22, 2018.

After their father’s death, two unhinged siblings reunite with Amy, their movie-loving sister who has Down syndrome (Jamie Brewer, “American Horror Story”). Together, they careen down the Great American Long Island Expressway, navigating strip malls, traffic jams and some serious (and not-so-serious) family drama. An unexpected turn reveals the moment that changed their lives…and the fact that Amy may be the only one who knows her own mind.

TICKET INFORMATION:
Tickets for Amy and the Orphans are available by calling 212.719.1300, online at roundabouttheatre.org, in person at any Roundabout box office: American Airlines Theatre Box office (227 West 42nd Street); The Harold and Miriam Steinberg Center for Theatre (111 W 46th Street) and Studio 54 (254 West 54th Street); or by visiting StubHub, The Premier Secondary Ticketing Partner of Roundabout. All single tickets are $79. For groups of 10 or more please call 212-719-9393 x 365 or email groupsales@roundabouttheatre.org.

ABOUT THE NEW PLAY INITIATIVE
Through the New Play Initiative, Roundabout proves its devotion to the development and production of new works by significant writers and artists. The Roundabout Underground program in particular, provides substantial artistic and financial resources to emerging playwrights to stage their debut productions in New York and on Roundabout’s stages. In addition to producing their first play, writers receive a commission for a future play, showing a level of commitment to writers’ careers and the future of theatre in New York that is unparalleled. The New Play Initiative has discovered and brought audiences some of the most important new voices in theatre and is dedicated to creating a diverse canon for the future of theatre. To learn more about Roundabout’s commitment to the development of new work, visit New Play Initiative.

Roundabout’s work with new and emerging playwrights and directors, as well as development of new work, is made possible by Katheryn Patterson and Tom Kempner.

The Harold and Miriam Steinberg Center for Theatre opened in March 2004 with an acclaimed premiere of Lynn Nottage’s Intimate Apparel starring Viola Davis, directed by Dan Sullivan. Since that landmark production, the center has expanded beyond the Laura Pels Theatre to include the Black Box Theatre and now a new education center. The Steinberg Center continues to reflect Roundabout’s commitment to produce new works by established and emerging writers as well as revivals of classic plays. This state-of-the-art off-Broadway theatre and education complex is made possible by a major gift from The Harold and Mimi Steinberg Charitable Trust. The Trust was created in 1986 by Harold Steinberg to promote and advance American Theatre as a vital part of our culture by supporting playwrights, encouraging the development and production of new work, and providing financial assistance to not-for-profit theatre companies across the country. Since its inception, the Trust has awarded over $70 million to more than 125 theatre organizations.