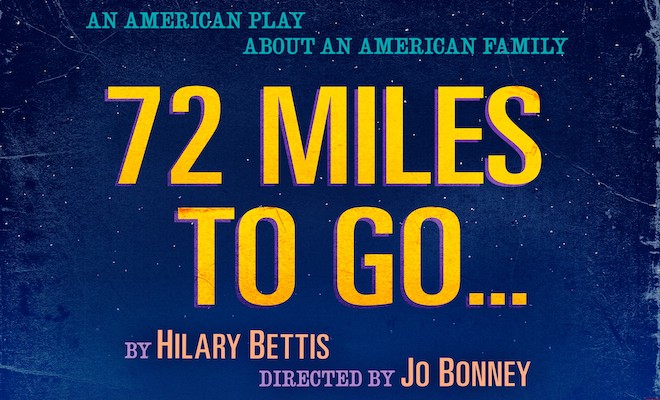 Previews begin February 13, 2020.
Official opening March 10, 2020.
Limited Engagement through May 3, 2020
Off-Broadway at the Laura Pels Theatre in the Harold and Miriam Steinberg Center for Theatre

72 Miles to Go… begins preview performances on Thursday, February 13 and opens officially on Tuesday, March 10. This will be a limited engagement at the Laura Pels Theatre in the Harold and Miriam Steinberg Center for Theatre (111 West 46th Street).

Seventy-two miles. That’s the space between a recently deported mother in Nogales, Mexico and her husband and children in Tucson, Arizona. It’s distance measured in the graduations, anniversaries, and countless daily moments they spend apart – but also in the love that keeps them together, no matter where they are. Don’t miss this profound and personal premiere from Juilliard playwright Hilary Bettis (“The Americans”) and Jo Bonney (director of the Pulitzer Prize-winning Cost of Living).

Roundabout Theatre Company welcomes the return of Triney Sandoval, who most recently appeared in Bernhardt/Hamlet (2018), as well as Marvin’s Room (2017) and A Man for All Seasons (2008).

TICKET INFORMATION:
Tickets for 72 Miles to Go… are available by calling 212.719.1300, online at roundabouttheatre.org, in person at a Roundabout box office; or by visiting StubHub, the Premier Secondary Ticketing Partner of Roundabout. Tickets are $79. For groups of 10 or more please call 212-719-9393 x 365 or email groupsales@roundabouttheatre.org

Major support for 72 Miles to Go… is provided by the Laura Pels International Foundation for Theater and the Edgerton Foundation New Play Award.

This production is supported, in part, by an award from the National Endowment for the Arts.

BIOGRAPHIES:
TYLER ALVAREZ (Aaron). Native New Yorker Tyler Alvarez is making his New York stage debut. Alvarez is best known for the series leading role of documentarian Peter Maldonado in the critically acclaimed Netflix series “American Vandal.” Alvarez also appeared on the award-winning Netflix series “Orange is the New Black” as Benny Mendoza, Gloria Mendoza’s son. Recently, Alvarez recurred on Hulu’s new season of “Veronica Mars.” Tyler also had a heavily recurring role on the final season of the FreeForm series “The Fosters.” On the film front, Tyler will soon be seen in the American High feature film Sid Is Dead in a starring role. Other credits include: feature film Pools, ABC’s “Fresh Off The Boat,” and Comedy Central’s “Alternatino.” Alvarez is represented by BUCHWALD.

HILARY BETTIS (Playwright) is a Brooklyn-based writer who works in TV, film and theater. She was nominated for a 2018 and 2019 Writer’s Guild of America Award for her work on the Emmy (Best Writing) and Golden Globe (Best Drama) series “The Americans” on FX, which she wrote on for the final two seasons. Her play, 72 miles to go… is a 2019 Finalist for the prestigious Blackburn Prize. She is a graduate of the Lila Acheson Wallace Playwright Fellowship at The Juilliard School. Bettis has received fellowships, workshops, and residencies at the Roundabout, Alley All New Festival, Orlando Shakes PlayFest, Bay Area Playwrights Festival, O’Neill National Playwrights Conference, 2050 Fellow at New York Theatre Workshop, John N. Wall Fellow at Sewanee Writers’ Conference, SPACE at Ryder Farm, Writer-In-Residence at Cape Cod Theatre Project, La Jolla Playhouse, New York Foundation for the Arts Fellow, Playwrights’ Week at The Lark, NNPN’s National Showcase of New Plays, Audrey Residency at New Georges, Two River Theater, Great Plains Theatre Conference, WildWind Lab at Texas Tech, The Kennedy Center/NNPN MFA Workshop, and a Sloan/EST Commission. She has had plays recognized by The Kilroys every year since its inception. She has been a Runner-Up for the Alliance Theatre’s Kendeda Award, Nuestras Voces National Playwriting Competition, American Blues Theater’s Blue Ink Award, New America Fellowship, and the Leah Ryan Prize. Bettis is a member of the Dorothy Strelsin New American Writers Group at Primary Stages, Ensemble Studio Theater, a Usual Suspect at NYTW, an Affiliated Artist at New Georges, The Kilroys, and a proud member of the WGA. The Ghosts of Lote Bravo received a National New Play Network Rolling World Premiere at the Unicorn Theatre in Kansas City, MO, Borderlands Theater in Tucson, Arizona. The play was published in American Theatre Magazine in February 2018 with stills from the production on the cover. Her play, Alligator, was produced Off-Broadway with New Georges and The Sol Project, and was nominated for a 2017 Drama Desk for Outstanding Music in a Play. Queen of Basel, a bilingual adaptation of Miss Julie commissioned by Miami New Drama, was produced at Miami New Drama in April 2018, and will receive its World Premiere at Studio Theatre in D.C. March 2019. Her play, 72 miles to go… received a workshop production at the Alley’s All New festival in January 2019, and will receive it’s Off-Broadway World Premiere at the Roundabout Winter 2020. As a screenwriter, Bettis has written, produced, and directed multiple short films, which have screened at film festivals across the globe. She has developed and sold multiple original TV shows, and is currently developing a project at FX with Propgate producing, and another project at AMC. And she is an alumni of the prestigious Sundance Institute Episodic TV Lab. She is represented by CAA and Grandview. www.HilaryBettisWriter.com

In 2020, Roundabout presents new works Off-Broadway, including: 72 Miles to Go… by Hilary Bettis, directed by Jo Bonney; …what the end will be by Jiréh Breon Holder, directed by Margot Bordelon; Darling Grenadine, book, music & lyrics by Daniel Zaitchik, directed and choregraphed by Michael Berresse; and Exception to the Rule by Dave Harris, directed by Miranda Haymon.