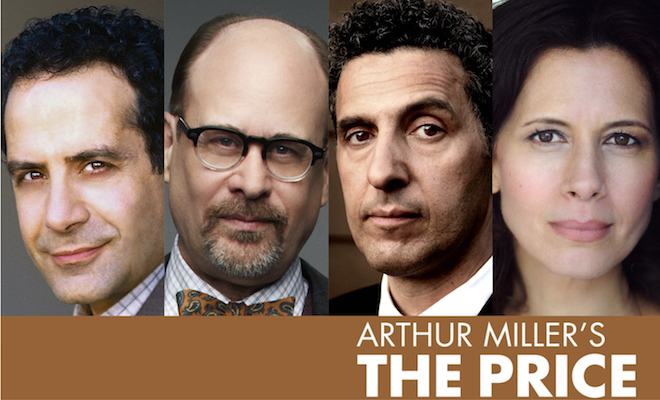 Casting for Arthur Miller’s ‘The Price’

Arthur Miller’s The Price will begin preview performances on Thursday, February 16, and open officially on Thursday, March 16, 2017. This is a limited engagement through May 7, 2017 on Broadway at the American Airlines Theatre on Broadway (227 West 42nd Street).

When the Great Depression cost his family their fortune, Victor Franz (Turturro) gave up his dream of an education to support his father. Three decades later, Victor has returned to his childhood home to sell the remainder of his parents’ estate. His wife, his estranged brother, and the wily furniture dealer hired to appraise their possessions all arrive with their own agendas, forcing Victor to confront a question, long-stifled, about the value of his sacrifice. One of the most personal plays by the consummate voice of the American everyman, Arthur Miller’s The Price is a riveting story about the struggle to make peace with the past and create hope for the future.

Roundabout Theatre Company welcomes back Jessica Hecht after her star turn opposite Jim Parsons in Harvey in 2012.

Roundabout has an extensive history with Arthur Miller, most recently presenting After the Fall in 2004 and The Man Who Had All the Luck in 2002 on the American Airlines stage. Other productions include a Tony nominated production of The Price in 1992 and All My Sons (1974 & 1997), The Crucible (1989), and the Tony winning revival of A View from the Bridge (1997).

Additional cast and design team will be announced soon.

Partial underwriting support for Arthur Miller’s The Price is provided by the Laura Pels International Foundation for Theater.

PERFORMANCE SCHEDULE:
The Price will play Tuesday through Saturday evening at 8:00PM with Wednesday, Saturday and Sunday matinees at 2:00PM.

BIOGRAPHIES:
JOHN TURTURRO (Victor Franz) studied at SUNY New Paltz and the Yale School of Drama. For his theatrical debut he created the title role of John Patrick Shanley’s “Danny and the Deep Blue Sea,” for which he won an OBIE Award and a Theater World Award. On television, Turturro was nominated for a SAG Award for his portrayal of Howard Cosell in “Monday Night Mayhem,” and again nominated for “The Bronx is Burning,” as notorious Yankee skipper Billy Martin. He won an Emmy Award for his guest appearance on “Monk.” And most recently, he starred in HBO’s “The Night Of” series. Turturro has performed in many films, including Spike Lee’s Do the Right Thing, and Jungle Fever. Martin Scorsese’s The Color of Money, Robert Redford’s Quiz Show, Francesco Rosi’s La Tregua, Robert De Niro’s The Good Shepherd, Tom DiCillo’s Box of Moonlight, Nanni Moretti’s Mia Madre, and Joel and Ethan Coen’s Miller’s Crossing, The Big Lebowski and O Brother Where Art Thou. For his lead role in the Coen Brothers’ Barton Fink, Turturro won the Best Actor Award at the Cannes Film Festival, and the David Donatello Award. Turturro has also appeared in the Adam Sandler comedies Mr. Deeds and You Don’t Mess with Zohan, and in three of Michael Bay’s popular Transformers films. He received Cannes’ Camera D’Or Award for his directorial debut, Mac. Other films as director/writer include Illuminata, Romance & Cigarettes, Passione: a Musical Adventure and Fading Gigolo.

TONY SHALHOUB (Walter Franz) is a Golden Globe Award-winning actor with a diverse resumé of engaging roles. Mr. Shalhoub just completed filming “Brain Dead,” a CBS summer series created by Michelle and Robert King. He is perhaps best known for his starring role as the obsessive-compulsive detective Adrian Monk in the popular television series “Monk,” for which he won a Golden Globe Award and three Primetime Emmy Awards. Additional television credits include “Nurse Jackie,” “Too Big to Fail” and “Wings.” Shalhoub’s feature film credits include Big Night, The Siege, Galaxy Quest, Men in Black, Men in Black II and Pain & Gain. Shalhoub voiced the character of Luigi in the popular animated movies Cars and Cars II, and he will reprise his role in the upcoming Cars III. Also, he voiced the role of Splinter in the Teenage Mutant Ninja Turtle movie franchise. Recently, he completed filming an untitled feature, starring Michelle Rodriguez and Sigourney Weaver, and Final Portrait, directed by Stanley Tucci. Shalhoub appeared in the theatrical productions of Act One and Golden Boy on Broadway, receiving Tony Award nominations for both. In late 2015, he appeared Off-Broadway in The Mystery of Love & Sex with Diane Lane. Shalhoub currently lives in New York City and his birthday is October 9.

JESSICA HECHT (Esther Franz) is currently starring on Broadway in the Tony Award nominated revival of Fiddler on the Roof. Prior, she last starred on Broadway in the Tony Award nominated play, The Assembled Parties. She was nominated for a Tony Award for her performance in the recent revival of Arthur Miller’s A View from the Bridge opposite Liev Schreiber and Scarlett Johansson. Her other Broadway appearances include the revivals of Harvey opposite Jim Parsons, Brighton Beach Memoirs opposite Laurie Metcalf, Julius Caesar opposite Denzel Washington, After the Fall opposite Peter Krause and Carla Gugino, and her Broadway debut in the Tony Award winning play, The Last Night of Ballyhoo. Her many Off-Broadway appearances include starring roles in The Three Sisters (Classic Stage Company), Make Me (Atlantic Theater Company), The House in Town (Lincoln Center Theater), Stop, Kiss (The Public Theater), Lobster Alice (Playwrights Horizons), Plunge (Playwrights Horizons), Flesh and Blood (New York Theatre Workshop) and The Fourth Sister (Vineyard Theatre). She has spent nine seasons at the Williamstown Theatre Festival, where she last played “Blanche” opposite Sam Rockwell in A Streetcar Named Desire. She will next be seen on film in Stacey Cochran’s A+ and was most recently seen in Tim Blake Nelson’s Anesthesia. Her other recent films include The English Teacher with Julianne Moore, “Emma Goldman” in Clint Eastwood’s J. Edgar with Leonardo DiCaprio, Rob Reiner’s The Summer of Monte Wildhorn with Morgan Freeman, and Jonah Hill’s mother in The Sitter. Other films include Helena From the Wedding, Fair Game with Naomi Watts and Sean Penn, The Winning Season with Sam Rockwell, and Wes Craven’s My Soul to Take. She was also seen in Woody Allen’s Whatever Works with Larry David, Dan in Real Life with Steve Carrell, Starting out in the Evening with Frank Langella, Sideways with Paul Giamatti, The Forgotten with Julianne Moore, and Tim Blake Nelson’s The Grey Zone. Ms. Hecht’s extensive television work includes her recurring roles on “Bored to Death” opposite Ted Danson, “Breaking Bad” opposite Bryan Cranston and “Person of Interest.” Well known for her role as “Susan” on “Friends,” she also starred in “The Single Guy” with Jonathan Silverman, and in James Brooks’s “What about Joan?” with Joan Cusack. Her many memorable performances include guest appearances on numerous television series including “The Good Wife,” “Nurse Jackie,” “ER,” “Seinfeld” and “Jessica Jones.” She will next be seen in the forthcoming series “Falling Water” and “Red Oaks.”

TERRY KINNEY (Director) is a co-founder of Steppenwolf Theatre Company. His directing credits there include East of Eden, The Violet Hour, A Streetcar Named Desire, A Clockwork Orange, Of Mice and Men, and One Flew Over The Cuckoo’s Nest, which moved to Broadway and won a Tony Award for Best Revival of a Play. NYC directing credits include the world premiere of Checkers by Doug McGrath, reasons to be pretty for MCC and Broadway (which received a Tony nomination for Best Play), After Ashley and Beautiful Child at the Vineyard Theatre, The Money Shot at MCC, among others. Mr. Kinney’s film directing credits include the short film Kubuku Rides (This Is It) for Steppenwolf Films and the feature Diminished Capacity with Matthew Broderick and Alan Alda, which appeared at the Sundance Film Festival. Film appearances include Save the Last Dance, Sleepers, Fly Away Home, Last of the Mohicans, The Firm, Devil in a Blue Dress, Turn The River, I Smile Back, November Criminals, and Abundant Acreage Available. TV credits include Tim McManus in HBO’s prison drama “Oz,” “The Mentalist,” “The Unusuals” (ABC), “The Laramie Project,” “30something,” “George Wallace,” “Black Box” (ABC), “The Good Wife,” “Show Me A Hero,” “Fargo,” TNT’s “Good Behavior,” and “Billions.”

Roundabout’s season in 2017 will include Arthur Miller’s The Price, directed by Terry Kinney; If I Forget by Steven Levenson and Napoli, Brooklyn by Meghan Kennedy.