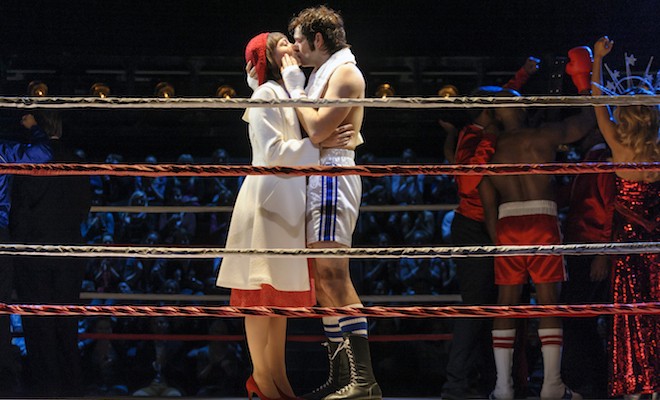 * * * * * * * *
November 4, 2013 – Stage Entertainment USA and Sylvester Stallone have announced additional casting for the upcoming musical, ROCKY. TERRENCE ARCHIE, who originated the role of Apollo Creed in the world premiere Hamburg production, will reprise his role for Broadway; his final performance in Hamburg will be November 24. DAKIN MATTHEWS will play Rocky’s trainer, Mickey, and DANNY MASTROGIORGIO will play Adrian’s brother, Paulie. They join previously announced cast members ANDY KARL and MARGO SEIBERT as Rocky and Adrian. ROCKY brings to life the iconic and inspiring story of struggling small time Philly boxer, Rocky Balboa, who gets a once-in-a-lifetime shot to go the distance against heavyweight champ Apollo Creed. Both an adrenaline-infused spectacle and a surprising story of blossoming romance between two lonely outsiders, ROCKY is a heart-stopping and viscerally theatrical new musical for everyone brave enough to follow their dream.

Produced on a shoestring budget, the original 1975 film, Rocky, was shot in 28 days, and starred its young and then-unknown screenwriter, Sylvester Stallone. Like the character of boxer Rocky Balboa, Stallone had to fight the studio, which wanted more bankable stars like Ryan O’Neal or Burt Reynolds, to be cast in the role. Stallone’s performance would earn him an Academy Award nomination for Best Actor and launch his career as one of Hollywood’s biggest stars. The small underdog film went on to become an American film classic, winning the 1976 Academy Award for Best Picture, and launching one of the most successful and iconic characters in Hollywood history.

ROCKY received its world premiere in fall 2012 in Hamburg, Germany, where it earned critical raves and where it continues to play to packed houses at the Operettenhaus Theatre.

TERRENCE ARCHIE will return to New York after originating the role of Apollo Creed in the Hamburg production of Rocky. Terence was last seen on Broadway in Ragtime and Off-Broadway as the title character in the critically acclaimed play, The Elaborate Entrance of Chad Deity, at Second Stage Theatre, a role he re-created in the show’s west coast premiere at the Geffen Playhouse. Other notable credits include Shakespeare Theatre Company’s productions of Two Gents: A Rock Opera, Tamburlaine the Great, and Edward the II; and Arabian Nights at Arena Stage and Berkeley Rep. His TV credits include Law & Order and One Life to Live. Terrence is a Detroit native and North Carolina School of the Arts graduate.

ABOUT THE CREATIVE TEAM

ROCKY features an original score by Stephen Flaherty and Lynn Ahrens, the celebrated Tony Award-winning and Academy Award-nominated songwriters behind Ragtime, Once on This Island, and Anastasia, and a book by multiple Tony Award-winner Thomas Meehan (The Producers, Hairspray, Annie) and Sylvester Stallone, who was nominated for an Academy Award for Best Original Screenplay for the 1976 Oscar-winning Best Picture, Rocky.

The production is directed by Alex Timbers, the Tony-nominated director behind the acclaimed musicals Here Lies Love and Bloody, Bloody Andrew Jackson, as well as Peter and the Starcatcher, which continues to run off-Broadway. The musical features choreography by Steven Hoggett, who received a Tony Award nomination for his work on Once and Kelly Devine, best known for the long-running Broadway hit Rock of Ages. ROCKY features set design by Chris Barreca (Marie Christine), costume design by Tony nominee David Zinn (Picnic, Other Desert Cities), lighting design by Tony Award winner Christopher Ackerlind (Light in the Piazza) and sound design by Tony nominee Peter Hylenski (Motown, Rock of Ages).