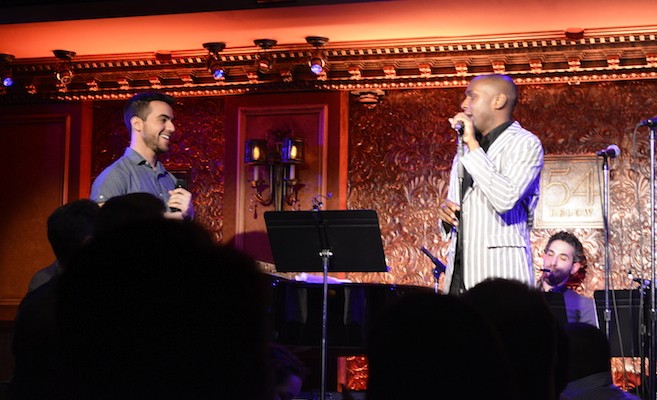 REVIEW ‘WHO WE ARE : THE SONGS OF LYONS & PAKCHAR you know the best part about perfection? it lacks nothing. that means that every part of every necessary element is present. another word for that perfection is excellence. another is brilliance. mastery. and another, greatness. all of those things were indubitably and faultlessly present…and thick. like a piece of nyc cheese cake. manageable and sweet. then again, i was expecting that from lyons & pakchar. you know how you go to your grammy’s house and you know that you’re gonna get a treat? same thing. multiply that excitement by the number of beating hearts in that room and you have a setup for a magical night. a similar set up was at the ‘#love’ album release in december (scroll back a few entries for that review) and if it’s possible i gotta say…this was even more dense. and 54 below is such a stellar venue in which to feast on this evening of musical refreshment. 54 below knows how to host a party and lyons & packchar knows how to throw one.

right away, the evening dashed into an indefatigable rendition of ‘crush’ that was brought with such an wild-horse-out-of-the-stall vigor, that my body started to twitch and a toothy smile darted across my face. i looked left then right and noticed that i was not alone. robin de jesus took the stage in the simplest of ways with ‘first song of summer.’ his voice is actually like a cool summer breeze…while sipping a mimosa with just the right amount of everything. next on the bill was ‘the sexy song’ but where was the singer? stuck in an elevator. so ‘smile’ took the stage.  every note was served with such a mettled spunk that i couldn’t help but comply with the song’s title. ‘the sexy song’ made it out of the elevator and more than made up for the missed appearance when he used his unwrinkled vocal sensibilities to tap into the entire room’s carnal side and make us all miss our babies. even those of us who don’t have them. lord, have mercy. cause jonathan sure did not.

we continued our musical and emotional journey with a pleaful yet unapologetic ‘who am i.’ this song, no doubt written from the

paunch of a most real experience, was gracefully rendered with such an honesty. bradly greer’s interpretation mixed with the tamber with which he intoned the song, made me just want to hug him.

lillias white. she said she was nervous. the music started, she opened up her mouth, and notes of perfection crawled out and wrapped themselves around the mic. she sang and i was transported back to a time and an place that was unlike where i was. the answer is yup. the question: did she deliver like only lillias can? the amazing thing? it felt like home. you remember grammy’s house? her voice and commitment hugged me like grammy would. it was familiar. it was real. it was relevant.

then the evening took a turn on the corner of ‘brave’ and ‘bold’ with another new song which was flawlessly sung by lyons’ roommate, john brink. (these boy know how to collaborate.) brink made sure that he left our jaws open. i thought i couldn’t take any more  but then felicia boswell took the stage. juicy. brassy. tempestuous. brazen. i can’t say anymore about that cause i’ll ruin it. cause she? tore. it. up. but i went from empowered and fearless to vulnerable and tearful with ‘free.’. an army of goosebumps marched themselves up my legs and my sides and across my arms.

er. with the conviction with which he belted this beauty you’d swear it was an all too familiar place. you could feel what he was saying.

but again…that’s lyons and pakchar.

absolutely a crowd favorite, ‘not meant to be in love’ blew another piece of the roof off. the amount of sass and audacity that was being flung around was ridiculous…and welcomed. (in case you wanted to know, she ended up being in love…and to that end so did we.) a duet between melody madras and daniel torres was sang like the cotton candy part of love tastes. syrupy, sweet, and cutely decorated with the most colorful of musically harmonious jewels, these two made me wanna get up and do paddle turns in an imaginary field of clover lilies and dandelions.

“one of the best parts about being a writer,” says lyons at this point in the evening, “is taking some of your friends and having them sing your music.”

ladies and gennulmen, christine dwyer, the new elphaba in ‘wicked’ on broadway. no question why she holds the role. but tonight instead of donning herself in green and black and defying gravity, she was at a ‘crossroads’ with her man who just won’t commit. so what does she do? she wallops hefty notes at the back walls. sure. she’s tiny. her voice? not so much.

‘over you’ — another humorous l&p favorite — was packed to the brim with ardor and  pleasantry. (at this point, i could only think about how the talented are surrounded by the talented.) ‘let go’  was an explosion of a declaration that was found in the fiercely angelic voice of julia mattison.  then the finale came…

two syllables. kil and gore. KILL gore. he took his place, the song started and he yelled, “STOP!” he was about to cry. he’d been telling lyons not to cry, but he became the most perfectly crafted hypocrite. “when you hear the song you’ll know why,” he said. and he was right. i can’t even say how much of a star this man (kilgore) is. he most certainly- wait. did he just stop again? yup. he did. to talk about his love and appreciation for lyons and pakchar. i have a feeling that if music theatre were a person, it would do the same thing, that is e

xpress its love and appreciation to these two boys (lyons and pakchar) and the talent that was slathered all over the stage. the agility of kilgore’s voice matches the agility of his spirit. he blew off whatever was left of the roof as he — on the third attempt — finished the song.

and daniel gutierrez — my friend and colleague — bought lillias white her drinks.

there was a lot of heart and soul on that stage tonight. a MASS of heart and soul on that stage and it flowed throughout the room like moonshine in the 20’s. again, history was being made on 54th street. and again, i was there to witness it. i left feeling high and understood and like i could conquer the world. i heard someone say, “i’d buy this album.” good. because you can. (click HERE.)  it was a night to remember.

back up singers who every everything but 20 feet from stardom: rashidra scott, olithea anglin, and darius harper.

(shout out to the awesome boys at stagelight mag…daniel g and stu b. you guys rock my world. it was great sharing this experience with you.)

“Who We Are: The Songs of Lyons & Pakchar” features Musical Direction by Alvin Hough (Motown) and is produced by Matthew Masten (Of Mice and Men, Buyer & Cellar) and Marianne Mills (Of Mice and Men, Beautiful: The Carole King Musical).